Laws May Be Brought In To Stop Harbouring Of Immigrants 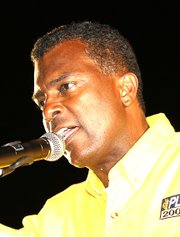 IN AN effort to curb illegal migration, members of Parliament will be looking at amending laws concerning the harbouring of illegal immigrants, possibly as early as next week, according to Minister of Foreign Affairs and Immigration Fred Mitchell.

Mr Mitchell said he met with Haitian officials to discuss how to stem illegal migration, and that they also discussed trade potential between the two countries.

He said: “We are looking to amend laws to make harbouring illegal migrants a serious offence with serious penalties. That should be coming perhaps as early as next week when the House resumes. Debate will take place on the floor because we want some public discussion about the matter.”

The Bahamas is also hoping to engage the Haitian government in discussions on allowing “intelligence officers” to operate in Haiti in an effort to combat human trafficking, he said.

“They’ve expressed an interest in pursuing it,” Mr Mitchell said. “We would like to do so because we believe that if we are allowed to have intelligence officers in Haiti, we can probably stop the smuggling or put a big dent in it from the north.”

However, the minister said Haitian officials are more interested in talking about trade between the two countries.

Mr Mitchell said Haiti wants current protocols which prevent agricultural goods from being imported from Haiti to the Bahamas, to be changed.

They argued it would help spur their economy and thus potentially reduce illegal migration.

Mr Mitchell said the two governments have been trying resolved the protocol issue “for a long time”.

“In fact, a memorandum of understanding was signed between the two countries I believe back in 2007,” he said.

“The last minister of agriculture had announced that he was dedicated to removing it. There was even an announcement that customs officers would be stationed in Haiti to help with the inspection of the goods.

“Because Haiti now exports mangos to the United States, we can only get them by getting them through the States and it’s believed that if we get them directly, it’ll be cheaper.

“Their argument is that would help them in trying to improve the economy of the north of Haiti and that’s the area from which migrants come to this country illegally. We repatriated 200 of them this week – 100 went out this morning (and) 100 went out the day before yesterday. So this is a really serious problem for us. We are committed to seeing how we can get that resolved.”

Do you really think if the Bahamas buys farm goods from Haiti direct, the illegal immigrant problem would cease. Mr. Mitchel talked about curbing the immigrant problem and Haiti counteract with selling their goods. Wonder if Leslie Miller was out taken out of context when he said 'Stupid Bahamians'. "However, the minister said Haitian officials are more interested in talking about trade between the two countries". Stay focus Mr. Mitchell. I see why the Haitians in our country does PLAY simple Thats just their country technique. (no insult intended, I still have alot of Haitian friends)

if we buy their mangoes ,they can build better boats ,and have more money to buy their work permits once they get here ,fly away should of kept this one to himself ,,lol

Opportunity for investment: Bahamian owned farm in Haiti, like U.S. Dole in South America, grow crops and export to the world. (Let's get in before the Americans).

To stem the flow of illegal immigration the government needs to implement the most strict immigration laws. My uncle is an immigration lawyer and I have been assisting him for some time now and we always stay updated about government's immigration policy. I heard about some news on this issue few days back, so I decided to check http://socialsecuritydisabilityappeal...">over at this website to find more information.

The issue of illegal immigration has been bothering them for a long time, now they definitely need to come up with strict laws which would help them stem the flow of these immigrants. There are immigration lawyers who would provide the necessary guidance on this. Most of these law firms are available online which makes it easier for us to access them. For instance, if you need help in a divorce case in http://www.darrowlaw.com/attorneys/">Sheboygan, contact Darrow & Dietrich Law Offices, they also have web presence.

They have to come up with stricter laws which would help them keep illegal immigrants away. If you migrate to another country make sure that you have the right documents with you and if you ever get into any legal trouble contact a law firm that handles this issue. For instance, in Phoenix you can hire Martinet Law Firm for help, you can access them online at http://www.martinetlaw.com/">http://www.martinetlaw.com.

The illegal immigration issue has been bothering them for a long time now and they have to take strict steps to solve this issue as fast as they could. However, the migrants should consider consulting with an immigration lawyer to get proper guidance on this issue. They could find plenty of law firms and lawyers online now, for instance, recently my neighbor needed a law firm that handles family law issues, he found them online at http://connifflaw.com/">http://connifflaw.com/.

Illegal immigration is a serious issue for any country, so the government has to take stern steps to put a stop to this. While hiring a new employee, every organization has to be very careful. They should conduct a proper background check, for this job they should take help of private investigation agencies like http://www.martinelliinvestigations.com/">Martinelli Investigations Inc., they are really efficient.

I believe that the laws of the Bahamas needs to be stricter and harsher and enforced to the fullest otherwise other people will find in necessary to do whatever they want in this country. If I was the Prime Minister today I would introduce the Bahamas Act for stricter laws and harsher penalties for law breakers. When it comes to illegal immigrants I would introduce a proper visa system and a permanent residence card that immigrants should have with them at all times if they want to reside and work here legally. The Bahamas immigrant should start doing routine checks in certain neighborhood and businesses known to house and employ immigrants and start checking them for PR and work permits. All government and private schools should not allow children of illegal immigrants to attend our schools. I would also make it illegal for an employer to employ illegal immigrants and issue heavy fines if found doing so and squatting on people's land is a definite serious offense and will be dealt with to the fullest extent of the law