FREEPORT - Prime Minister Perry Christie says Urban Renewal 2.0 is bigger than politics and for it to work effectively it has to be “above politics”. 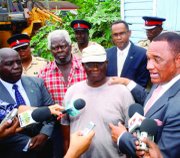 “Our politics must always take second place to the essential issue of moving the Bahamas forward,” Mr Christie said on Wednesday at the official launch of the programme in Grand Bahama at the Hilton Outten Convention Centre.

He said both are distinguished Bahamians who have a feel for people and who have the capacity to rise above politics.

“As Prime Minister, I have to call on the all the people regardless of their politics. The MPs in Grand Bahama all of them should understand that it is bigger than them.

“We are all in transition and this is about establishing a culture in this country where young men know that if they walk into somebody’s house and rape or try to rape, they will be caught and they will be severely punished.

“This is the reason why in our selection for the leaders of the Urban Renewal commission, we chose two distinguish Bahamians – Algernon Allen, a former minister in the FNM government, is that he has demonstrated in a public capacity a feel for people, and young people in this country.

“And co-leader, Cynthia Pratt, who served as DPM, brings to this mission an incredible feel for people and one, who I think, like Algernon, has the capacity to rise above politics.”

In his remarks, Mr Allen said he comes “as a spiritual son of Sir Cecil Wallace-Whitfield, but also a philosophical brother of Prime Minister Perry Christie.”

He said that Urban Renewal is about changing lives – transforming a home, a street, and a community and uplifting those in need.

“This will be above politics. We send a clarion call to all to join us,” Mr Allen said.

Wouldn't be nice is if each and every Bahamian youth and mature citizen would be given the opportunity to have gainful employment, so that they could take their girl out to a movie, for an ice cream or to dinner on the weekend? To have an opportunity for a decent future through progressive advancement in their employment? Then if they refuse and they are caught serving as an instrument of fear raping or trying to rape someone, slam them for 50 years onto the Agricultural Chain Gang. This is the same reason why America - which many of us try emulate - will never be a true superpower, because they have neither the will, desire, compassion, or humanity sufficiently so as to offer that same opportunity to every American.