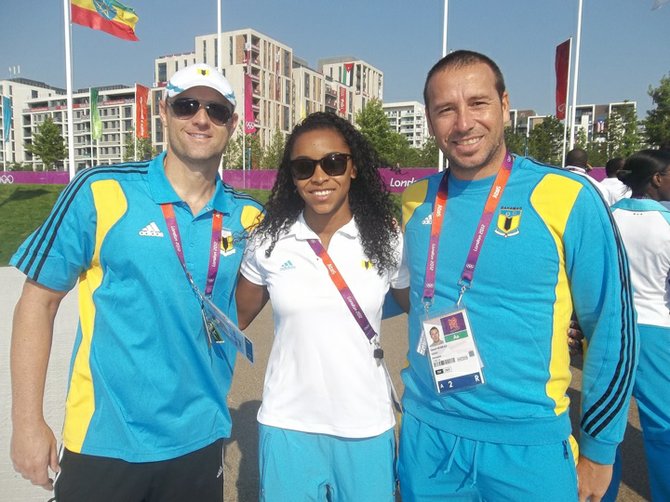 LONDON, England — The 2012 Olympic Games has already started, but the countdown is still on for Team Bahamas to start competing.

Two days and counting for Arianna Vanderpool-Wallace in swimming and three days for the track and field team.

“Everything is looking good for the team,” said head women’s coach Dianne Woodside. “Everybody has settled in and realising that the competition at the games are soon to start. So everything is going exceptionally well. They just have to fine tune because all of the work that they needed to do before they got here has been done. So it’s just getting their minds together before they compete.”

Woodside said the biggest challenge for the coaching staff that includes Henry Rolle, the relay coordinator, is to decide who will make up the final six in the pool for the women’s 4 x 100 relay.

“It’s going to be hard because we brought in seven girls and we can only take six,” Woodside said. “So we have to decide who will be the final six. That also goes for the men’s 4 x 400 relay because they also have seven guys to choose from. We will wait until the last minute when we have to declare the relay pool to make that final decision. but we already had a meeting with the athletes to explain that.”

The seven women vying for the six spots are veterans Chandra Sturrup and Debbie Ferguson-McKenzie, quarter-milers Christine Amertil and Aymara Jones from Grand Bahama and young sprinters Sheniqua ‘Q’ Ferguson, double IAAF World Jr sprint champion Anthonique Strachan and V’Alonee Robinson. Shaunae Miller has also been running exceptionally well in the sprints, but she will only be concentrating on the 400 at the games.

As for the men’s 4 x 4, the contenders for the pool are veterans Chris ‘Fireman’ Brown and Avard Moncur, national champion Demetrius Pinder from Grand Bahama, runner-up Ramon Miller, as well as Grand Bahamian Andrea Williams and Wesley Neymour, who hails from Grand Bahama. The seventh man to be considered is Grand Bahamian Michael Mathieu, who will be competing in the 200.

Woodside said that all of the athletes will be analysed during their daily training sessions and those competing in their individual events before the final decision is made.

While it has been a dream of every athlete to compete at the Olympic Games, veteran coach Ronald Cartwright has always had a dream of coaching at the games.

“Both of them have been practicing real hard and they are looking good,” he said. “If they can take that practice into the meet they will have a very good chance. Thank God we are injury free. We’re not working as hard going into the meet. So things are looking good. I expect that they both will perform exceptionally well at these games.”

Like the IAAF World Championships last year in Daegu, South Korea, Cartwright is making his debut here at the Olympics as a coach.

Last year, after coach Keith Parker was unable to travel because of the flu, Cartwright stepped in and helped to guide Trevor Barry along as he went on to win the bronze medal in the men’s high jump. Parker is in London and will be working directly with Barry. The two other jumpers on the team, female long jumper Bianca Stuart and men’s triple jumper Leevan ‘Superman’ Sands, are being coached by Henry Rolle.

That leaves just Thomas and Higgs, whom Cartwright said he’s comfortable working with at the games. The only games that Cartwright has not been a coach on is the Commonwealth Games and he’s hoping that the Bahamas Association of Athletic Associations will give him the opportunity to complete the coaching cycle in Glasglow, Scotland, in 2014.

“The experience that I had the other night when I walked into the stadium was something that I always wanted to do,” said Cartwright about being a part of the march pass at the official opening ceremonies. “I just didn’t want to say that I was at the Olympic Games, but that I was actually a part of it. When I walked in, I said ‘Lord, you’ve given me what I wanted and I thank you very much for it.’”

Cartwright’s only regret was that he didn’t get to see the whole ceremony because by the time they walked from the Olympic Village to the Olympic Stadium, it was time for the march pass of the countries, so they missed the entire pre-show. But whether or not he got to view it, the fact that he entered the stadium as a member of Team Bahamas was the proof in the pudding that he can now call himself an Olympic coach.