A NEW research project has been launched using a deep water baited video camera known as 'The Medusa' to document the weird and wonderful creatures that inhabit the depths of the Exuma Sound. 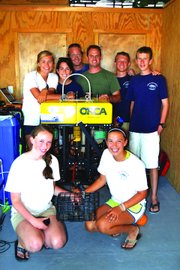 The Fall 2012 Island School research team with Lee Frey, the engineer who helped to design and build the Medusa deep water lander.

The deep ocean is the single largest ecosystem on the planet, yet it remains largely unexplored, and the majority of species that inhabit this cold, dark, high pressure environment remain virtually unknown.

Until recently these deep-water environments acted as a refuge from human exploitation, however, as shallow water fish stocks are depleted, commercial interests are turning their attention to the deep.

The little that is known about these deep water species suggests they have amongst the slowest rates of population growth for any vertebrate on the planet. This combined with increasing fishing pressure has led some scientists to conclude that many deep water species are disappearing before they can even be described. 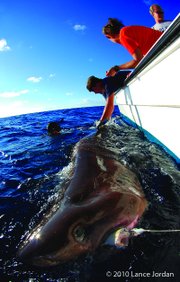 Dr Widder, founder of ORCA, is a specialist in bioluminescence (the light chemically produced by many ocean organisms), and has been a leader in helping to design and invent new submersible instrumentation and equipment to enable unobtrusive deep-sea observations.

A long time supporter of The Island School and Cape Eleuthera Institute, Dr Widder generously offered the use of her deep sea camera to the Shark Research and Conservation Programme.

The Medusa is a self-contained camera system with the ability to record in the low light and high-pressure environment of the deep sea.

This unit is capable of unobtrusively filming at depths of up to 2000 meters (6600 ft) using red light undetectable by deep water fish and has a data logger to record salinity, temperature, depth and light.

Initial test deployments conducted by student researchers from The Island School have already identified a large number species including a number of crustaceans such as giant isopods, lobsters and shrimp, several fish and a number of deep water elasmobranchs including bluntnose six gill and sharpnose seven gill sharks, Cuban dogfish and a sawtail cat shark.

The highlights from these preliminary deployments can be viewed at www.youtube.com/watch?v=e4ecOlFVoSE&feature=youtu.be.

Further deployments are planned later in the year and Medusa will continue to bring back footage from the least explored environment on the planet.