'My Son Is Not Ordering Hits From Prison' 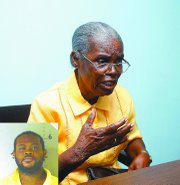 Natalie Stubbs speaks to the Tribune.

NATALIE Stubbs, mother of imprisoned Stephen "Die" Stubbs, is again proclaiming her son's innocence - this time against alleged reports her son is ordering hits from within Her Majesty's Prison.

Mrs Stubbs said she heard on the radio yesterday morning, a representative from the Ministry of National Security claiming Stubbs was orchestrating murders on the street from behind bars.

"How can you scandalise and say my son in prison and giving orders for people to get killed?" Mrs Stubbs asked. "How my son could be doing it?"

She explained that if the allegations she heard are true, that would only reflect badly on the prison.

"That means to say that the prison is slack," she said.

"I thought better than the National Security man to say something like that. He listened to the lies what the people them telling him.

"My son has never killed nobody. How my son could be in prison and send a message to kill people?"

Mrs Stubbs also hit out at claims her son was ever involved in gang activity and drugs.

"My son never was in no gang - I don't know nothing about my son in a gang," she said. "And they say my son is a drug dealer - they never caught my son with no drugs.

"The policeman tell me one time, say 'Mrs Stubbs, every time I search your son the only thing I find is one little testament Bible in his pocket. That's all I could find on him'."

It was earlier this month that Mr Stubbs appealed to law enforcement officials to release her "innocent son and allow him to live his life in peace" following his arrest.

Stubbs' longtime girlfriend, Jacqueline Miller, also spoke and said Stubbs is not the person police have made him out to be.

"They are just out to get him," she said. "We understand from a police officer that CDU was told to get something on him just to get him off the road. It's like they have society out thinking that he is a bad person, and he is not.

"Stephen might have his ways, everybody has their ways, and everyone might say this or that about him, but he's a nice person."

Stubbs was arrested at the Ridgeland Park home he shares with several relatives on May 31 after police announced he was wanted in connection with a night club shooting on East Bay Street that ultimately killed two men -- one dying at the scene -- and left six others seriously injured.

However, he was not charged in connection with this incident, instead being charged with aiding and abetting the August 21, 2009 murder of Delano Morris.

Favorite Ms. Stubbs quote: "That means to say that the prison is slack" (commenting on allegations against her son giving orders for persons to be killed while he's still in prison)

They may be putting some stuff on him but why would they be out to get him especially if he isn't the least bit guilty of something. She made him out to be saint, anyway that is what some mothers do about they offsprings.

did she ever said her son was a saint i could read and i don,t see that

The bey nickname is "Die".... anyone with ears know that name

some people nick name is killer wat does that mean

mr bobbywright sounds like you help do these 500 murders

I feel bad fa mum tho. She might be clueless for real. Or everything said about him is all a myth.

bobbywright - Seriously, the tribune should have been able to give your information to the police, cause you big mouth people whom just spreading rumors need to be interigated by the police for knowing so much but proving so little. If you're not man enough to assist the police with your 500 per pop information, shut the phuck up - real talk. Look how much poeple in the past professional name was Pastor or Rev. yet they were arrested for unlawful sex. Now because a person 'nickname' is "Die" your assuming him to be some dark angel of death.

Come on now positive that's a bit harsh. up u always hear bout what goin on especially when ya in school. Yes 500 is exaggeration and speculation but his name been around for a long time associated with criminal acts, similar to 90. In my comment I was gettin at in court it ain good to have a nickname die The jury the judge the lawyers will want to know how did you earn that nickname. Kind of like when C-Murder was on trial for murder....uh oh we back on names again.....

Yes you right but even though I heard so much about eg. 90, that doesn't give me the right to spread hear say. Or if I have proof of what I'm saying, like I told bobbywright, assist the police with proof and don't slander a persons name with hear say. When you commented on the individuals nickname, I simply pointed out that a nickname in some cases does not match a persons character eg. Pastor/Rev = unlawful sex.

Agreed...you right everyone shock when you hear pastor or Rev mix up with crime or scandal cause the title doesn't match but it is pretty hard to be shock when someone name Die or C-Murder charged for murder. That still shouldn't be used as evidence though but it does makes a strong argument.

This whole appeal by Mrs. Stubbs appears to be a gimick. Whether it is to change the public perception or help in his impending case. We all know that he is the HNIC. These young boys on the streets idolize him for his bully, murdering tactics and would do anything he says. I'm sure this publication can print a whole lot more interesting article than this. This lady doesn't live on these streets.

"he innocent he innocent ,and even worse now ya,ll lock my boy up money drying up "....miss, no offence this is not reality tv ,,,my mother would be hiding her head not running her mouth off to the media

They both wearin Yellow Shirts in they pics.....Minister Nottage U got this right ; - )