Us Alert On Trafficking 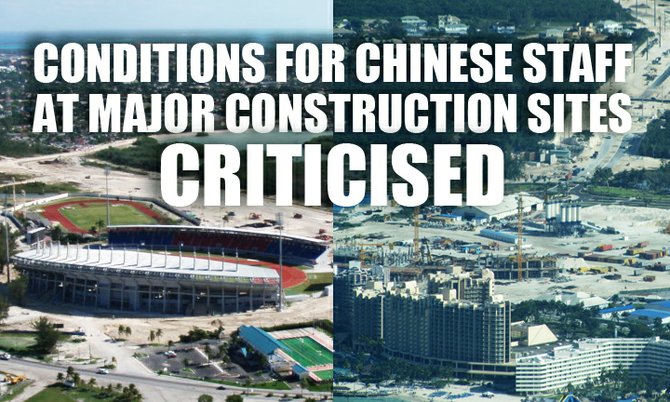 THE alleged lack of “freedom of movement” for Chinese workers is an indication that human trafficking may be taking place at a large-scale construction site in the Bahamas, according to a new report from the US State Department.

This, among other factors – including the government failure to prosecute a single human trafficking case – has led the Bahamas to be classified as a “Tier 2 Watch List” on the State Department’s 2012 Trafficking in Persons Report for the second year in a row.

“Media outlets have reported that Chinese workers in a large-scale Chinese construction project in The Bahamas do not have freedom of movement – a human trafficking indicator,” the report said.

When reached for comment, Baha Mar senior vice president of administration and external affairs, Robert Sands firmly stated that the US could not be referring to their project.

“It doesn’t apply to us because our persons have freedom of movement,” Mr Sands said, before pointing out: “Baha Mar is not the only construction project going on in The Bahamas where Chinese workers are employed.”

Representatives for the Chinese Embassy, meanwhile, could not be reached for comment up to press time.

The State Department’s report continued to describe the Bahamas as “a destination, source, and transit country for men, women, and children subjected to forced labour and sex trafficking”.

“Undocumented migrants, particularly the estimated 30,000 Haitians who largely arrive in The Bahamas voluntarily, are vulnerable to forced labour, especially in domestic servitude and in the agriculture sector,” it read. “Experts also have raised concerns that some workers from Jamaica could be vulnerable to involuntary servitude.”

Groups “especially vulnerable” to sex trafficking in the Bahamas include foreign citizens in prostitution and “local children engaging in sex with men” for basics such as food, transportation, or material goods, the State Department stated.

“The Government of The Bahamas does not comply fully with the minimum standards for the elimination of trafficking; however, it is making significant efforts to do so,” the report said. “Despite these efforts – most notably the establishment of a high-level interagency committee and continued statements of commitment to address human trafficking – the government has not identified or assisted any victims of trafficking or initiated any forced labour or sex trafficking prosecutions; therefore, The Bahamas is placed on Tier 2 Watch List for a second consecutive year.”

However, the State Department did name a “positive development” as the government’s March announcement of the establishment of a “working level interagency task force” set to handle “specific allegations of human trafficking and a protocol to guide officials in handling trafficking cases.”

The State Department also praised the government for holding a trafficking awareness event in March.

The entire Trafficking in Persons Report can be read online at the State Department’s official website – www.state.gov.

Then let them move freely, the U.S was complaining on one of the cables that those Chinese workers could end up in the U.S, now their complaining that they aren't able to move freely. I would let them move freely because they can't hide in the a country of 95% black without being notice, and when they end up in the U.S then that is the U.S problem, the major problem is with the U.S is you're damn if you do and you're damn if you don't.

Doesn't Bamar have low security chinese prisoners on site? I see the "prison" complex when I go past there. So how can Mr. Sands say they have freedom of movement?

Go back to my much earlier blogs and you will see that I had expressed these concerns but as they always do the red shirts said I was talking rubbish. Red China does not like unions - it's that simple. But then again neither do the red shirts.

The fact is that these workers are employed by the government of China. China is a communist country. So the workers are under contract similar to what our policemen or defence force marines would be if ther were on assignment abroard. They have to be accountable to their employers 24/7. In fact most of these 'workers' will not receive their full pay until they return to China. This may be bad for the Bahamas in that these workers are clothed, fed and housed by their employer, so little of their paychecks will be spent in the Bahamas if any. So the concern should not be human trafficking but the chance that some of the workers may abscound and try to get to the USA, not unlike how Russian and Cuban athlethes use to do at major soprting events.

Let's all stop dancing around this subject, as all we have to do his read the statements issued previously, directly by Baha Mar's own senior executives to understand the conditions the Chinese government brought their countrymen to Bahamaland?

Its more than just Bahmar...these people need to get serious ..the US is not going to allow them to pay lip service to them ....they have an embassy here and live among us ..so tell them the truth...the Chinese food stores have apartments on top all barred up and Chinese people live in them..you ever see them all over the place no way..met a man in the Chinese food store on carmichael..apparently they are slaves in their country and brought here as indentured servants ...go investigate instead of saying it een true ...all these cuban and jamaican women in the strip clubs..who bring them in and for what purpose ???there is no reason we have not convicted a trafficker yet ...get with it ..and stop playing around with our country ..