Two Dead After Shootout With Police 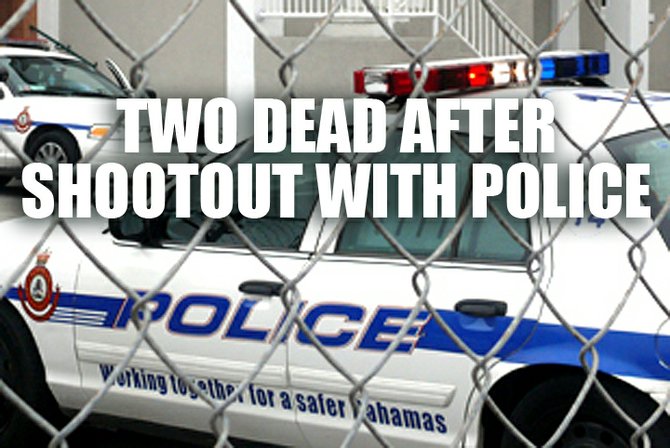 TWO men are dead and two teenagers are in police custody after a high speed chase and shoot-out with police yesterday morning.

The incident took place around 2.15am off Soldier Road.

Police say officers were on patrol in the Highbury Park area when they saw the occupants of a dark coloured vehicle acting suspiciously.

Police tried to stop the vehicle, but the driver sped off.

A chase followed with police pursuing the vehicle into the St. Michael Road area where the suspects shot at the police and the police returned fire.

According to police sources, the driver and the passenger, ages 20 and 24, were shot in the head and died at the scene.

A handgun was recovered at the scene.

Assistant Commissioner of Police Anthony Ferguson said it is too early to determine what or if the teenagers in custody will be charged.

Police have not yet officially identified the men who were killed, however, ACP Ferguson said all the men were Fox Hill residents.

In other crime news, officers of the Traffic Division conducted operation, “Sweet Breeze” on Wednesday that resulted in 40 drivers being reported.

Police are encouraging members of the public to adhere to the rules of the road as police will continue with their efforts to make the Bahamas a safer place for all.

What did the junior minister of national security say," we went a whole week without a murder" Did that statement bother some people?

How could that be classed as a murder?

There needs to be an investigation into why the police took these other two into custody and not shooting them too, bad@#$ clowns, doing the same mess all the time between 10pm and 3 in the morning...............sad though, although we know that they fired at the police, I heard some fools today talking mess already bout the police too trigger happy........hmmmm. Wonder what citizen may have been dead, robbed or shot Etc if they weren't noticed acting suspicious.

You know something have to be done about murders as well as other crimes in the Bahamas, from the government to the parents and also the children. There will be a funeral service for mother and son tommorrow, this is foolish to see anywhere in the world much less my home country.