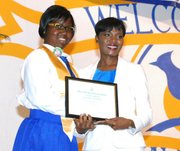 Under the GBPA's 'Making It Happen' initiative, at the end of each school year, college scholarships are awarded to the top achiever in every high school graduating class on the island.

"The Top Achiever Scholarship award is one of our most notable programmes, created to recognise the academic achievements of our brightest and best high school scholars," said GBPA president Ian Rolle.

According to the GBPA's director of community relations, Geneva Rutherford, there are currently more than 100 students on full or partial GBPA scholarship awards.

"Each year hundreds graduate with aspirations of the future. By means of GBPA funded scholarships, many are helped in making these dreams a reality," she said. "The opportunity for them to pursue tertiary level studies is of great importance to us."

Recipients may choose any field of study; however, GBPA encourages pursuing careers that will invigorate and fuel the development of the City of Freeport and Grand Bahama Island. Scholars are also encouraged to begin training at the College of the Bahamas before travelling abroad.

At St George's High School, under the theme, 'Charting a New Course to Success with a World Class Education', Honour Society member Tania Martinborough walked away with the valedictorian award, and was top achiever in History, Music and Religious Studies.

Grand Bahama Academy's top achiever, Lavanda Braynen, credited divine providence for her accomplishments. With an almost 4.0 GPA, during her valedictorian address she stated that trials had made her stronger. "This accomplishment was not easily attained but the tassel was truly worth the hassle," she said.

The graduation ceremony is an unique experience for every student. I remember mine, I remember all my hopes and dreams which I had then. A teacher gave a speech about those http://techandscience.com/techblog/Sh...">powerful tools that we learned during our school years and how we can apply them easily in our lives and especially in our careers. It was a speech that inspired me to follow my dream and to become the man that I am today.