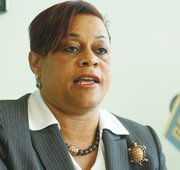 The Road Traffic Department is set to kick off an "aggressive" road safety campaign this summer, targeting young drivers in an effort to reduce traffic fatalities and accidents, according to State Minister for Transport and Aviation, Hope Strachan.

This week's death of 16-year-old Jimico Brown in a traffic accident "brings to light" the importance of road safety, she said, noting he was the country's 21st traffic fatality for the year and offering her "sincere condolences" to Jimico's family.

"This recent tragedy involved an underage and uninsured driver which brings to light the importance of the work our Road Traffic Department and its Transport Policy and Planning Unit do," she said. "Our National Road Safety Strategy places great emphasis on the critical issue of road safety with several ongoing and new initiatives planned."

These initiatives include the ongoing Driver Education Programme in schools - which caters to students in grade 10 and 11 - as well as various youth symposiums and public awareness campaigns Road Department officers have been involved in.

The department has another new initiative lined up, Mrs Strachan explained.

"During the summer months, this ministry through the Road Traffic Department will engage in an aggressive public awareness campaign and invite public-private partnerships, as we as a nation encourage a walking and driving culture of safety."

The ministry also has "pending legislation" concerning road rules and road safety that is currently under review before being tabled in Parliament.

"We presently have before the Attorney General's office, several pieces of legislation which have been drafted relative to road safety under the National Road Safety Strategy plan which we are looking forward to having commentary on in the near future," Mrs Strachan said.

"Additionally we at the Ministry and the Road Traffic Department are one year behind schedule with respect to a global initiative termed the Decade of Action for Road Safety.

"We are very concerned with the high incidence of reckless activity on our streets, especially from motorcylists who seem hell-bent on not wearing helmets and other protective gear, the road-hogging bus drivers, and those who have yet to master the art of transiting the round-abouts and double-laned roads," the State Minister continued.

"With this respect, the Decade of Action for Road Safety together with our National Road Safety Strategy will be forcefully implemented in the near future," she said. "I encourage all Bahamians to slow down and live, to look out for one another and to be courteous and to think while traversing our streets."

More information regarding the road safety awareness campaign will become available to the public in July and August through television and radio ads, Ms Strachan said.

Driver Ed. needs to be re-introduced in the public (and private) school system. As our roadways become more complicated to drive and conjested, no student should be allowed to graduate high school without one semeter in drivers education and road and public safety. Many young men drive without a drivers license because they are 'too macho' to take driving lessons after leaving school,but if it is incorporated ino the high school curriculum they would be more willing to partake in driving lessons