The Strength Of A Mother

NO MATTER how high they have climbed or how much they have achieved, prominent and professional Bahamian women often agree, their mothers above all else are the most inspiring people in the their lives. 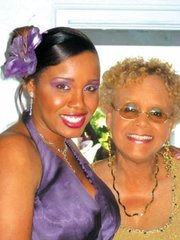 Dr Keisha Patterson says, "She is always giving up herself and caring for others."

Whether speaking about a sense of humor or an ability to care for others, women shared with Tribune Woman days before Mother's Day (May 6), the many traits and values they learned from mom and the true meaning of motherhood.

For Bahamas International Film Festival (BIFF) Founder and Executive Director, Leslie Vanderpool, the love of her mother Pauline Vanderpool renders her almost speechless. She said her mother stands as her best friend and confidant.

"I thank God everyday for having a mother like her. She is my rock, my love and I get my drive from her in every way. I hope I can be like my mother and it is just a joy to be in her presence. Like my mother, I am passionate, energetic, I have a love for life and stickability. She is a beautiful and open minded person," said Ms Vanderpool.

"The idea of working together, I got that from her. She is definitely a regular person, but she also exhibits a lot of strength, and that is very important," she said.

Like Ms Vanderpool and Ms Walker, women around the world are taking the time to express love for their mothers in advance of Mother's Day. In an interview with Goodhousekeeping.com, United States Secretary of State Hillary Clinton spoke about how encouraged she is by her mother.

"My mom didn't have very good mothering herself, so to learn how to mother with just on-the-job training was so inspirational to me," she said.

American television host and the daughter of actress Joan Rivers, Melissa Rivers told the website, the best advice her mother has ever given her is to never give up. "She believes when one door shuts, another door opens. Always, always move forward. I admire her tenacity and her generosity and her ability to do 17 things at once," she said.

Amanda Coulson, director of the National Art Gallery of the Bahamas told Tribune Woman, even though her mother Edith Coulson has passed on, she draws inspiration from her mother's example. She showed how a woman can not only hold a family together, but advance professionally as well.

"I definitely learned some things from her because I think old school values are very important and she did that with humor, which I also think is important. It is hard to sum up your mother, but she was amazing. I have two girls and I hope I bring them up with the same confidence as my mother," said Ms Coulson.

When band manager of the Illest Charmaine Bourbon thinks about her mother Gloria Burrows, she remembers her not only as a mother, but as a woman. She said what stands out about her mother is her "purity of mind".

"When I say that, I'm talking about her sincere love of God that she expresses in her daily life; her willingness to sacrifice; to listen and do what is being asked of her in good faith," said Ms Bourbon.

To have been a mother of eight kids, a wife and a grand mother, Ms Bourbon said there were a lot of dreams that her mom had to put on hold, but she always did her best and taught important lessons.

"She taught me to travel the world; know who you are and reach for your passion. She is an author and she inspires me every single day, it's just so much," she said.

When Bahamian doctor, Keisha Patterson spoke about her mother Sandra Dean-Patterson, she said she looks at her as one of the most important persons in life. Known as a giving and caring person, she said her mother has always been there for her, no matter what.

"I see myself adapting her motivating, hardworking and caring ways. If I could be even half as good a mother to my daughter as my mom was to me my daughter will be truly blessed," she said.

As a child, clinical director of the Caribbean Center For Child Development in the Bahamas, Dr Michelle Major watched her mother, Manuela Major, go through a severe illness, and ever since then, she takes on each day of her life with true strength.

"She had a brain tumor when I was a child and watching her go through that made me realise how important a mother is. She gave me strength by watching her survive that and it sticks with me through the day to day stresses that I face. I myself went through a bad diagnosis so that helped me a lot," said Dr Major.