Call for orderly behaviour during elections 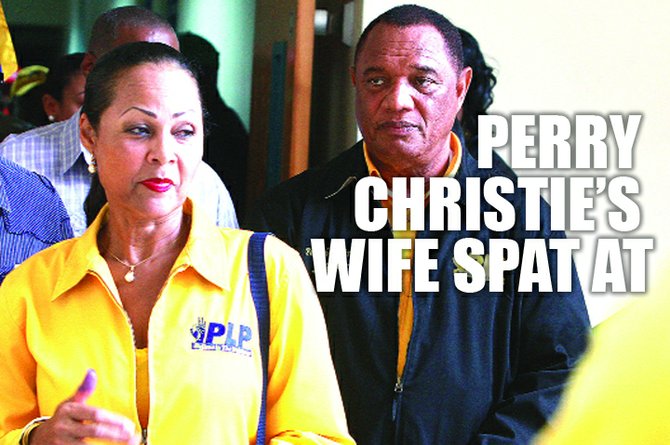 POLITICIANS have renewed calls for civil and orderly behaviour during elections after a supporter spit at the wife of a party leader.

Progressive Liberal Party leader Perry Christie and his wife faced angry jeers from opposition supporters when they arrived at the advance poll yesterday.

Mr Christie said the couple were bombarded with vulgar and provocative insults as they pulled up to the entrance of the College of The Bahamas' hotel training institute. The culprits reportedly called Mr Christie a "sissy" and shouted at his wife to return to the United States.

Mr Christie's wife, Bernadette Christie, was reportedly spit at by an elderly man in a Free National Movement shirt who approached the car.

"There was somebody out there in a lacefront weave, she was just spewing venom at me," Mrs Christie added.

"We're beyond this, I don't know why people get so worked up. It's just a political process, you vote for who you prefer, give me the opportunity to vote for who I prefer."

Mr Christie said: "Anyone who knows me, knows I ain't no sissy. The point is that kind of talk is just so vulgar, unacceptable and inflammatory because you see on the other side were PLPs and when they heard that we had to calm them down and so that is what is wrong."

"We have to be very careful about moving forward all political leaders must ensure that our supporters know that the leaders want them to act responsibly, conduct themselves responsibly and remove themselves away from provocative situations, that's what we have to do to ensure that this democracy reigns supreme."

Yesterday, FNM chairman Carl Bethel condemned the act as unacceptable regardless of the tense political climate.

Mr Bethel: "We are in a tense situation and sometimes people say things, but to spit, to seek to touch, to seek to hurt, or harm anybody is absolutely unacceptable conduct."

Speaking to members of the press at the airport in Central Andros, Mr Ingraham said: "I condemn the action of anyone who would have spat on his wife.

"I don't think that anyone should call him names either. "

Mr Ingraham added that he takes no offence to verbal abuse from PLP supporters.

"I stopped the car, smiled at them, waved, to them and moved on. No big deal."

Have tribal zealots been whipped up some much in to a frenzy they have lost their minds? This is a new level of low for politics in my beloved land. Nobody can justify or excuse this despicable act, perpetrated by a deranged FNM supporter. Probably one of those hardcore FNM's who proudly proclaim they was UBP before the FNM existed and never voted for the PLP or believed in majority rule who still harbours great hatred and contempt for PLPs. Regardless of your historical distaste for each other PLPs and FNMs need to dial done the rhetoric and vitriol personal insults and debate the issues like the DNA has begged you to time and time again during this election period. On May 8th the real shadow powers of the foreign investors and the local wealthy merchant class will be back in charge laughing all the way to the bank while raping The Bahamas of its wealth, and most of you will still be standing around with your hands out wondering how you got bamboozled again after the party is over. .

Your ignorant and foolish comment certainly needs a response. "Probably one of those hardcore FNM's who proudly proclaim they was UBP before the FNM existed and never voted for the PLP or believed in majority rule who still harbours great hatred and contempt for PLP's" Let's see, you would need to be at least 63 years old and most likely a white man... Highly unlikely this type of person would be found jeering at the former Prime Minister and his wife at the advanced pole. The report said "Reportedly spit at by an elderly man in a Free National Movement shirt" According to your way of thinking he more likely was an old PLP turned FNM. No matter what, it was a most disgusting and degrading act!!! Spitting at another human being is one of the lowest forms of nastiness for lack of better terms. Remember God records in his word regarding his Son, that they "Spit in His Face"

Check the actual police report on this matter

Worst insult ever. There are some who witnessed the event and said it was bottled water. I hope that is true. No one, NO ONE should be spat upon.

To the writer, the correct phrase is SPAT UPON not spit at

A PROVEN LIE!..LESSON DONT BE SO QUICK TO JUMP ON THE BANDWAGON OF KNOWN LIARS!