Minnis sworn in as opposition leader 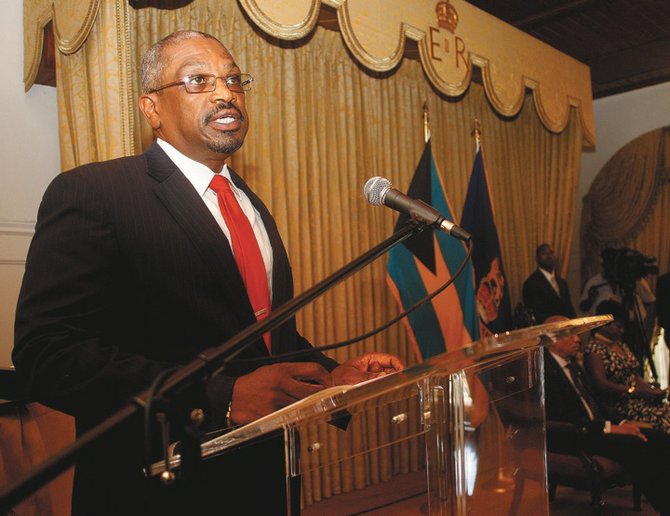 KILLARNEY MP Dr Hubert Minnis was sworn in at Government House yesterday as the Leader of the Opposition, pledging to go about his duties with "vigor, determination, and purpose."

He thanked his constituents for electing him to serve his second consecutive term in the House of Assembly, stating: "I am grateful for the confidence you impose in me and for the support you give me every day."

He also thanked his party and colleagues for their support and endorsement.

"I pledge, on behalf on the official opposition, to hold the government accountable in the conduct of the people's business," Dr Minnis said. "We will not oppose for the sake of opposing, we will, however, be vigilant in ensuring the protection of the rights of all in our land.

"We seek to ensure accountability and transparency in the conduct of public business in The Bahamas. We will work to ensure that the people of The Bahamas have a government working for the benefit and advancement of all Bahamians," he continued. "A government that will not use the criteria of political affiliation to facilitate obtaining a job, or a contract, or a license, or a favourable government decision, or a scholarship."

Dr Minnis said he expects in the coming weeks and months to "confirm to the public why next time, they ought to vote for the Free National Movement."

While Dr Minnis has been selected as the Opposition Leader and will subsequently be appointed by the Governor General, party national chairman Carl Bethel explained on Wednesday the party will still have to choose a new leader in convention.

The party will host a one-day working convention on May 26 to determine the leader, deputy leader, and other party officers, according to Mr Bethel.

Dr Minnis was unanimously elected to the post during a meeting with the FNM's parliamentary group and central council on Wednesday night.

There, he expressed his gratitude to his constituents, campaign staff, loved ones, and the current leader of the party Hubert Ingraham, whom he called a "special and personal" friend.

He thanked Mr Ingraham for his "outstanding service to the people of The Bahamas and the FNM".

"For the sake of all Bahamians, let us pledge to carry on his legacy and vision, which is to build a greater opportunity society for every Bahamian across the length and breadth of the country."

Dr Minnis was first elected to the House in 2007 and served as Minister of Health. According to his official biography, he is also former president of the Medical Association of The Bahamas, member of the Medical Council, and chairman of the Hotel Corporation of the Bahamas.

Killarney is represented well by Dr. Miinnis. There is no doubt that he will lead the Opposition well.

Congratulations Dr. Minnis. We in Killarney are proud of you and wish you all the best.