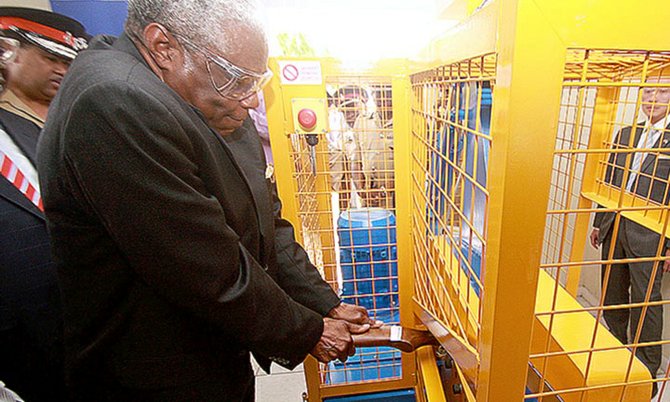 ILLEGAL and obsolete firearms will now be destroyed with a set of hydraulic shears handed over to the Bahamian Government by the United Nations.

The shears will destroy the country’s stockpile of confiscated weapons and weapons no longer in use, including 237 firearms as well as 4,010 rounds of ammunition that have been confiscated so far this year.

National Security Minister Dr Bernard Nottage was present for the official handing over ceremony at the Internal Security Division where he called the event “symbolic” and drew a connection between the smuggling of illegal weapons and illegal drugs.

He said: “That this event would be among my first acts as Minister of National Security is symbolic of my Government’s unwavering commitment to destroy the illicit trade in firearms and the concomitant illicit drug trade that has led to carnage in our communities.”

In convening the project, the Government collaborated with the United Nations Office for Disarmament Affairs (UNODA), specifically the UN Regional Centre for Peace, Disarmament and Development in Latin America and the Caribbean (UN-LiREC).

The illicit trade in small arms and light weapons, Dr Nottage said, has a “direct impact on the fabric of society” and the security of the nation.

“The large number of illicit firearms and ammunition recovered by our law enforcement efforts suggests that there must be a thriving industry in existence to supply and perhaps re-supply the owners of those illicit weapons,” he said.

“Today, the main source of weapons involved in crime in the Bahamas has been illegal firearms that have been smuggled into the country.”

Dr Nottage pointed out the country is “strategically located” between major producers and consumers of illegal drugs which contributes to illegal gun smuggling.

“A major contributing factor to the surge of gun-related crimes in our country and the region has been the trafficking of narcotics together with the availability of firearms,” he said. “We have seen that firearms have been the weapon of choice for the protection of the contraband during transportation and are also smuggled in along with the drugs.”

There’s also evidence, he continued, that illegal drugs are traded for illegal firearms. The weapons are then used for turf protection, intimidating customers and competitors, empowering recruits, maintaining discipline, and for executing informers, Dr Nottage explained.

“As such, we have seen a direct correlation between the drug trade, illegal firearms and violent crime,” he said.

The National Security Minister also spoke briefly on two new initiatives that are planned for the future, including a National Firearms Control Strategy.

“The Government is determined to maximise our resources in thwarting all efforts to smuggle illegal firearms,” Dr Nottage said.

So, to counter the “proliferation and violence perpetrated with firearms” the Firearms Control Strategy will be introduced.

This will include “intensive surveillance” of Bahamian waters by the Defence Force.

The Government is also “committed” to the formation of a National Intelligence Agency comprising all law enforcement departments.

This will “address all categories of major crimes” in the country and will be facilitated by a “sustained collaboration and information exchange” between law enforcement agencies, Dr Nottage said.

good atleast now they will be destroyed and the rogue police officers cant sell them back on the streets.....but what about the bullets? a gun can scare someone but a bullet has to kill them

when did you hear that was a problem, this is what is nothing more, if this is a problem first do an investigation and put officers before the courts dont make erounious statements about rouge police officers selling gun , and you must be saying from the armoury, not only is this not the case it is nt a ruimour

Well this will put a den in crime ....lol

I think that it is a great decision. They should not give to everyone the possibility of buying weapons. I have a weapon too. I used it when I go hunting. I even bought some http://www.gggaz.com/tactical-shotgun...">Benelli accessories for it.