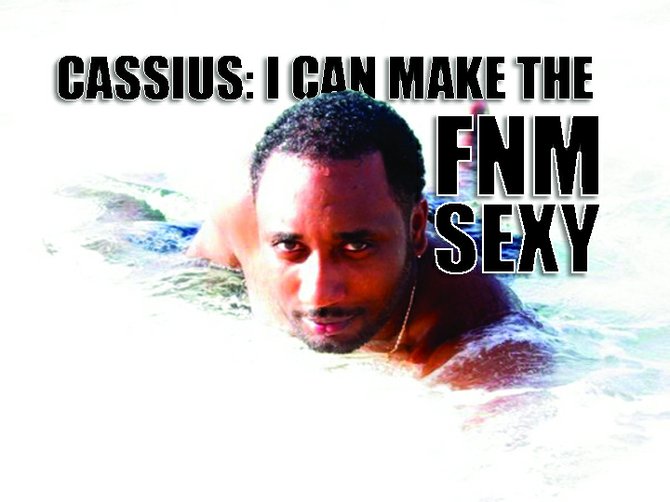 A FORMER FNM candidate has thrown his hat into the ring to be the party’s deputy leader saying he can make the FNM ‘sexy.’

Cassius Stuart, pictured, hit back at reports the job will be uncontested at the party’s upcoming convention and said rival contender Long Island MP Loretta Butler-Turner would not bring the “sexy” the party needs.

"I can make the FNM sexy and more attractive. She is not appealing to the woman voter and I am."

“I think I will do a better job as deputy leader than she can. I can make the FNM sexy and more attractive. She is not appealing to the woman voter and I am. They just are not attracted to her. We lost the female support in the last election and I can get them back, I can strengthen our support,” he said.

“It is only wise for us as a party to put fresh more dynamic faces in the forefront. I know what it takes to fight the PLP and to be in opposition, she doesn’t. She won’t protest in front of Parliament like I have. I have put my feet to the ground regardless of who is in government. We need to build our party. We need to crystallise who we are and that starts with the leadership.”

Mr Stuart said as deputy leader he can also bridge the gap between the ‘haves and the have nots’.

He said: “We do not have the lower class vote. We lost touch with the grass roots. We need to bring both spheres together. If we do that we will be dynamic. So it is not true that no one will contest her. I am contesting her. However, I do not think anyone will contest Dr Hubert Minnis for the leadership. He has got the full backing of all the majority of the party members.”

Mrs Butler-Turner announced her decision to throw her hat in the ring as four FNM senators were sworn in on Wednesday.

With the party’s convention less than two weeks away, Mrs Butler-Turner said she had already started canvassing delegates and had launched a social media platform in a bid to capture voters.

Dr Minnis was sworn in as Leader of the Opposition last week. He is expected to vie for leadership of the party.

Carl Bethel, party chairman, confirmed he will be defending his post in the upcoming convention on May 26.

Mrs Butler-Turner brushed off Mr Stuart’s comments and said: “It’s all a part of the democratic process.”

She said: “He has the right to say whatever he wants. We are a part of the same team and I think we both want what is best for the party. I am prepared to fight for the position. His views are his business. May the best person win.”

And, now this breaking news story comes along just in case their skeptics of my early predictions of the FNM "peep show" Hubert is leaving behind. My first glance at the photo and headline had me saying; Good Lordy me, here Comrade Bran goes again, cause they sure look alike here, don't you agree?

lol i thought it was Bran too

Mr. Stuart you receive what you wanted... press coverage. You are not in Hollywood, California. Unfortunately for you, there is another side, loss of respect for you as a serious politician. Excellent example of "political suicide". FNM, forget him!

"We do not have the lower class vote". Tribune was this an actual quote from Mr. Stuart or are you imbelishing a little. And the FNM party I know do not Protest in front of Parliment or do they hand cuff themselves to the Speakers Mace. Can someone please show this clown the exit ASAP.

What a media photo opportunity that would be to see elite FNM's in protest. The late Androsian Clarence A.Bain would say; "Great God Almighty what is this i see protesting down in front of the native's House?"

Just another act added to the "peep show" left behind by Hubert. Comrade Cassius kicking off his campaign for FNM deputy leader, sure as hell cancels out the credibility I had been questioning just yesterday over The Tribunes' unnamed FNM source that confirmed there would not be a challenge to Comrades Minnis and Butler for the leader and Deputy leader vacancies. Hubert claimed a lot of things but Cassius got him on his lady's appeal thing. You just couldn’t be creative enough to make this stuff up. Now we know why had Cassius disbanded his party to join forces with the DNA, what a personality clash that would have been between Comrades Cassius and Bran. Great move Comrade Cassius you kick off your campaign for deputy by insulting Comrade Loretta for having no sex appeal. I think this time you insulted 90 percent of the women who will be voting at the FNM’s “mini” leadership gathering. Just maybe it was for good reason that only Hubert’s campaign posters were visible during the 2012 General Elections. He couldn’t dare take his foot off the mouth’s of his party’s candidates, likewise for five years with his cabinet and sitting MP’s, knowing what could have slipped from their mouth’s. Not that his FNM regime could have possibly suffered a grater defeat. Thanks Hubert, I sure as hell can't wait for more photos to be headlined featuring all the new acts to be added to the FNM's "peep show."

first i thought it was a picture of Bishop Eddie Long from atlanta lol ///Hubert Minnis/l Butler_Turner, in my opinion , are good choices..

I cant believe he let the picture leak ...... or was that intentional. Hmmmm. Ya know the girls can't resist good hair. lol. I wonder if he put activator in that?