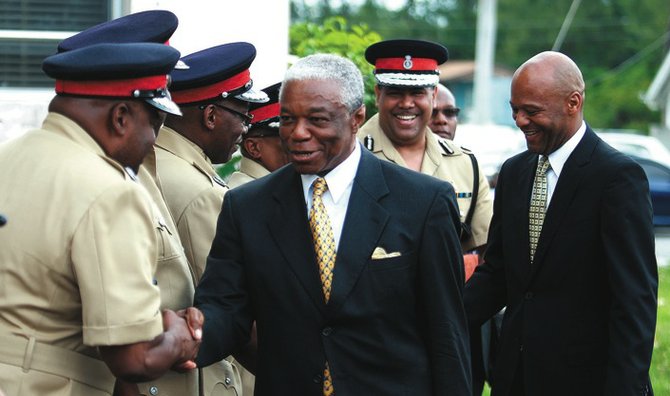 MINISTER of National Security Dr Bernard Nottage yesterday said reducing the murder count is not only realistic, but necessary as the government moves forward this year.

Already police have predicted that murder numbers could exceed last years record of 127, as five months into 2012, the murder count stands at 53.

"We must reduce for example the number of murders. We cannot carry on like this. There are far too many guns in this country we must find them, we must find the perpetrators, and we must put them behind bars, we must destroy the weapons (and) the drugs."

Urban Renewal 2.0 is also set to begin in the coming weeks, which according to the PLP will be a major driving force in lowering crime in inner city communities.

State Minister for National Security and overseer of the initiative Keith Bell said the improved version will have a renewed focus with trained professional at the forefront.

"What you are going to see is a renewed focus whereby we've started looking at the centres already. We've started to look at other agencies to ensure that they get their people on board."

"During the last administration persons indicated that persons who were untrained were in charge of the programmes, that was never the case. What we intend on doing is to ensure that professionals from all of the respective ministries are in the communities. They will be supported by the community who will realise that they are stockholders and they will decide their own destinies in terms of what happens in their communities."

Mr Bell added that the Ministry along with Deputy Prime Minister Philip Davis are also in talks with several ministries, including housing, social services and health that will also be involved in the initiative.

MURDER COUNT MUST COME DOWN??? YOU CAME IN POWER TO SHARE THIS ENLIGHTENMENT WITH US??

"URBAN RENEWAL 2.0 IS BEING STRATEGIZED AS WE SPEAK ALONG WITH OPERATION CEASEFIRE"......PURE HYPERBOLE....OR IN MORE COMMON LANGUAGE BULL$%^&T.

WHAT EXACTLY ARE THESE PLANS ABOUT??? ENOUGH OF THE PEP TALK PLEASE BE CLEAR DR. NOTTAGE.

TO BE FAIR THOUGH.....TOMMY T WAS AN ABSOLUTE LOUSE AS WELL!!!

AND THESE ARE EARLY DAYS YET......I AM GRATEFUL FOR YOUR FOCUS SO FAR...DR. NOTTAGE....... JUST KEEPING YOUR FEET TO THE COALS

Stop the Violence. Too many people dying and for what......drugs. Stop acting like Americans.

we have a higher per capita murder rate than new york city,,,and one of the highest incident of reported rape in the world , i think we have over taking the americans /per capita/

Yes, if you keep saying crime must come down, and how serious you are, then maybe the criminals will stop what they are doing and see the errors in their ways. Wake up people, you can't stop some one from trying to commit a crime but you can use inteligence, manpower and 21st century technology to put a dent in their efforts. There are thousands if not millions of terrorist worldwide who would love to destroy America, but they are repeatedly thwarted because of proper, intelligence and investigative agencies along with technology that is used to prevent these acts. Its time for us to realized that we are being terrorrized by our own citizens and we need to do what is needed to combat these terrorist not just talk about it.