Deaths Take Toll To 12 In A Fortnight 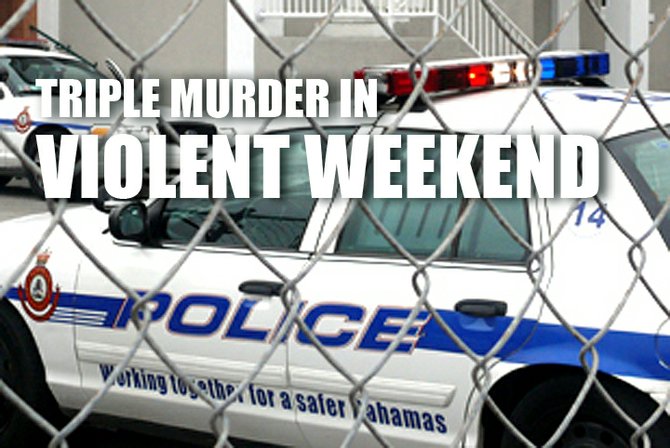 THREE men are dead and four are fighting for their lives in hospital after a weekend of violence rocked the capital. The bloody spree follows nine killings in the space of seven days – taking the murder count for last two weeks to 12.

In the first murder, police said a man was walking through Meadow Lane off East Street when he was approached by four other men.

The victim reportedly got into an argument with one of the men, which resulted in him being shot multiple times in the chest and abdomen.

He was taken to hospital by a private car, and died of his injuries at around 10am on Saturday.

Police have not officially identified the victim but The Tribune has learned he is 26-year-old Plillario Simmons of Podoleo Street.

Simmons was on bail for stealing and receiving and was also wearing an electronic monitoring device.

At present police have no one in custody for this murder.

A few hours later, around 6am, police received information of a brawl in the parking lot of the Independence Shopping Centre.

The fight resulted in three men being stabbed.

They were all taken to hospital where one man died around 10.30am after being stabbed multiple times in the chest and abdominal areas.

A second male is listed in hospital in critical condition and the third male was treated and discharged.

Police are also investigating the circumstances into the death of a man who was found floating in a pond around 7:20am Saturday.

The victim, who has not yet been identified, was discovered in a blood stained white and red shirt and blue underwear, lying face down in the pond at the rear of the National Insurance Building, Baillou Hill Road.

A pair of blue jeans and black sneakers were also found in bushes close to the victim.

Police sources say the man, who is believed to be in his mid-twenties, was discovered with multiple head and hand injuries.

He was pronounced dead at the scene.

A 45-year-old man of Coco Plum Lane off Florida Court is in serious condition in hospital after being shot multiple times.

Police say the victim was at his residence around 11:30pm on Saturday when he was approached by a male and shot multiple times in the chest.

Police are also investigating a stabbing incident that left a 26-year-old man of Robinson Road in hospital.

According to reports, the victim was at Robinson Road at 9pm on Saturday when he was approached by a man known to him and stabbed in the neck and leg.

He was taken to hospital where he is listed in serious, but stable condition.

Police are investigating and are appealing to members of the public who may have any information regarding any of these incidents to contact them at 911 or 919, the Central Detective Unit at 502-9991 or Crime Stoppers anonymously at 328-TIPS.

The murder count now stand at 56 for this year.

On Friday, Minister of National Security Dr Bernard Nottage said reducing the murder count was not only realistic, but necessary as the government moves forward this year.

He said the government was in the process of setting targets along with policies and operations to combat crime, a feat he claimed marred the previous Ingraham administration.

Yes, if you keep saying crime must come down, and how serious you are, then maybe the criminals will stop what they are doing and see the errors in their ways. Wake up people, you can't stop some one from trying to commit a crime but you can use inteligence, manpower and 21st century technology to put a dent in their efforts. There are thousands if not millions of terrorist worldwide who would love to destroy America, but they are repeatedly thwarted because of proper, intelligence and investigative agencies along with technology that is used to prevent these acts. Its time for us to realized that we are being terrorrized by our own citizens and we need to do what is needed to combat these terrorist not just talk about it.

That is EXACTLY what they are Terrorists. And they must be stopped

i get so tired of saying it ,its our morals and sexual habits ,,as long as we keep making children without fathers and girls date for i phone and hairdos crime will continue to increase ....better policing will help ,but our police do a good job catching the bad guys ,buts its hard when we keep producing more people than our gdp growth can substain ..take a look around at our neighbors if you want to predict our future ....

Yes there is hope for the next generation if we as society get involved to make a difference. We need answers for this generation and we need to be pro-active and not reactive. This requires leadership, capabilities and sacrafice. We most be bold in our approach to this problem if there is going to be any difference in the short term.

An Anti-Terrorist Law IS WHAT WE NEED. Repeat offenders for violent crime and/or involved in weapon trade or illegal arm use should be deemed a TERRORIST. The ATL should read: Anyone who, through an act of criminal violence, causes the death of, or inflicts harm be it physical, mental or emotional to any person within the territory of The Bahamas, or damage to physical property, or supplying or cause to supply, illegal weapons and its instruments, and through his/her actions has a history of recurrent, repeated offenses of similar or more eggregious actions contrary to the Law, shall be deemed a Menace and Threat to ALL civil society and therefore, through his/her own actions be known as a Terrorist and as such, will be viewed as An Enemy To The State Of The Bahamas, and will cause to be put into effect every means necessary to the Keepers of The Peace and Defenders of The Law, to rid such person, without inpedence and/or interference from existing Law, from this Land. ANY discussion be it public/private of this Law will be deemed given aid and abettment to Terrorist and will be subject to penalty by the courts.

We are in a War against Criminals. We NEED to CLAIM our country back. PEACE is an ACT of The WILL, not mantra

I noticed it to, I guess it isn't as relevant when the PLP are in charge.

we live in our homes all caged up with burglar bars like we are in jail and the criminals runs around the town with guns doing as they please. we need to fight back, but the justice system needs to do its job and stop giving out bail so easily, they need to have strict laws and enforce them.

Wow, just finished reading the news on line, I am so shocked about the amount of murders for the year,56!! So who is going to take care of all of those "fatherless" kids, I am so sad and embarrased about the way our coutry has come to.Politicians! mothers, fathers, clergymen, lend me your ears! what is wrong with our young black men? (who will soon be extint) Why don't the government make all of those murders pay for their crimes by bringing back the DEATH PENALTY, instead of overcrowding the jails, thus costing taxpayers thousand and thousand of dollars to keep them there for a few years , only to get out (without being rehabilated) to commit more crimes. Something is very wrong with our judical system, and it needs to be fixed ASAP!

Is it just me , or does anyone else noticed the new "accessories" of our teenage girls? They might think that it is cute, but it is permanent and for real. It is kids having kids. Like when I go to the mall or places where there are lots of people, it saddens me to see a lot of teen girls, with babies, like they think that this is cute.This trend is real,most of these kids are raising kids without fathers! It is time for us ( mothers and fathers) to teach our kids about "self worth" and " respect" of their bodies. I know that times have changed, but right will always be right, and wrong will always be wrong.Parents, please, please, teach our young people, to respect their bodies, and to respect one another.What is wrong with believing that "your body is a temple" Young ladies, I am pleadind with you all to stay in school, and get your education, so that you can be successful, and the ones who have children/child, to go back to school, so that you can become self sufficient, and independent , to help raise, future leaders, and continue to make our Bahamas, a small and great contry.Iam also tired of seeing grand-parents, raising their grand-kids. It is time that we continue to instill in our kids , an old saying " you make your bed, now lie in it ".

What is wrong with, morality, pride,respect, and self worth, if many of us practise this, our country will be great for us again, BAHAMIAN PRIDE.