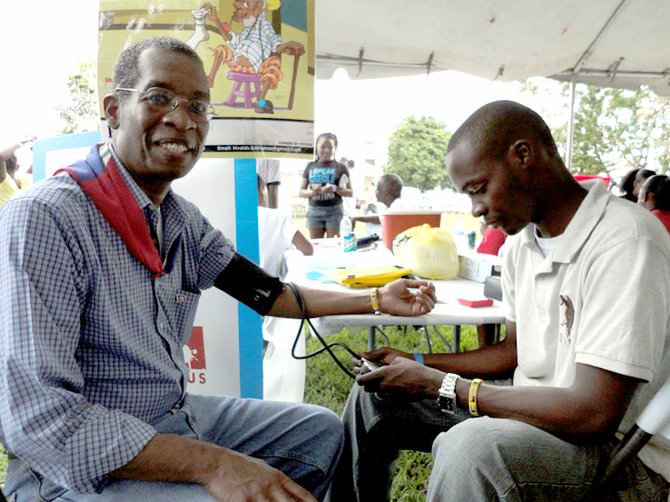 Haitian Ambassador Antonio Rodrigue (left) has his blood pressure checked on site by a Ministry of Health nurse.

Healthy lifestyle counseling, free glucose and cholesterol screening, blood pressure readings, and rapid HIV testing were accessible to those attending the annual cultural festivity held on the upper grounds of the National Museum.

"It was a good partnership between the Embassy and the Ministry of Health. They brought another level to the Festival so it was not just entertainment, but something practical and important for the attendees' health and well-being, not just to have fun but to test cholesterol, blood pressure and other blood tests," said Haitian Ambassador, Antonio Rodrigue.

The health team is committed to attending public events and offering healthy lifestyle services. Recent testing sites include the National Family Island Regatta in Exuma, Fish Fry at Arawak Cay and the Mall at Marathon. The team is scheduled to be at Arawak Cay again on Sunday, May 27 beginning at 8pm, to offer complimentary essential health screenings to the public. Free phone cards are usually offered to the first 100 persons being tested at public sites.

The Ministry of Health programme, which is a PEPFAR project (U.S. President's Emergency Plan for AIDS Relief), worked in collaboration with the HIV/AIDS Centre and the Bahamas Red Cross.

At the Haitian heritage festival, most patrons dressed in the Haitian flag colours - red, blue and white - as a mark of patriotism, celebrating with Creole food, music, dance, and other activities. Haitian Flag Day has been celebrated each year since the 1930s.

This is definitely a commendable initiative. The reason behind most health problems is that people hardly have the awareness about health issues. Due to unhealthy lifestyles, lack of nutrition most of the health problems occur. Try to have as much nutrition you could out of your diet. While buying vegetables, fruits, look for http://www.freedommessage.us/?p=900">purity and quality.

Health is equally important for young people as for old one who stay in http://www.financiallypoor.com/retire...">assisted living. I believe this mini health fair had a very big success.

Thank you for this post. It's the living proof that people have some humanity left and they still help each other. I've seen this kind of commitment at the http://www.maslakdds.com/">Phoenix dental, the employees over there are very kind and helpful.

Well,this is what I'm thinking when somebody is telling me about helping. It's the main idea. My sister dreams to http://careeralley.com/self-improveme...">become a nurse educator and a lot of people tells her that it's one of the most kind careers in this days.

It is important for us to go through regular medical check ups so that we could learn about our health condition. It is essential for us to eat healthy for a proper nutrition. But sometimes we need an extra help and for that we could opt for health supplements, so of which help in http://www.getholistichealth.com/1797...">retention of nitrogen.

Such health care screening facilities are really vital for us, if you keep your health in check then you can be aware. If you are already undergoing some treatment then it is important for you to keep in touch with your doctor. It is also vital to go for the best healthcare service provider for your health issues. For instance, if you need quality chiropractic care then contact Back To Health Clinic, they are also available online at http://salembackdoctor.com/">http://salembackdoctor.com/.

This is a good initiative because it would help the people gain awareness about their current state of physical health. If you find any kind of problem with your health, immediately contact a good doctor. These days you can find the information about healthcare service providers online, for instance, you can find Atlantic Gastroenterology at http://www.atlantic-gastro.com/services/">http://www.atlantic-gastro.com/.

This is indeed a great initiative which would help people be more aware of their healthcare needs. Now there have been many improvements in the health care sector, we have access to advanced centers which are taking care of our health care needs. In fact, now you can even access a health care service provider online. My neighbor recently underwent eyelid surgery, she found the facility online at http://www.gregganskemd.com/">http://www.gregganskemd.com/.

If they continue to provide such health screenings at public events then they would be able to create awareness among the people. These days accessing a healthcare service provider has become comparatively easier thanks to their online presence. Recently we needed an oculoplastic surgeon for our grandmother who has Thyroid Eye Disease, we searched online and found the reputed surgeon Dr Geoffrey M. Kwitko at http://www.kwitko.com/">www.kwitko.com/.

This was a good initiative and through such events they would be able to spread awareness about health issues all over the country. They should also launch a website where people could find http://www.njhearingaids.com/newton">additional info about different health problems and preventive measures they should take.