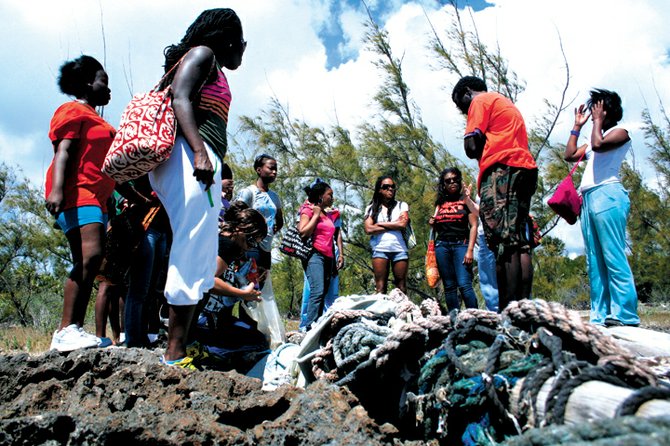 THE wisdom of Africa suggests: "Every time an elder dies, we lose a library". Recognising this ancestral truth, the Island Stewards Camp and Spelman College participated in a joint oral history project to document the personal histories of eight women of wisdom in the Bahamas.

The Spelman Independent Scholars (SIS) are participants in a two-semester, interdisciplinary learning experience at the historically black women's college in Georgia, USA. The SIS oral history component aims to collect life stories of women in the African diaspora.

Describing the project in a concept paper, Spelman scholar Danielle Phillips referred to the honoured and revered place older women assumed in traditional communities, as griots and sages, seers and prophets.

"Their stories teach us about the values and beliefs that shaped their reality and in immeasurable ways, they impact our own. For this reason then, we see their memories, anchored deep in the soil of wisdom, as cherished treasure. It is this truth, as old as time itself, that undergirds the SIS Oral History Project," said Ms Phillips.

For its 15th anniversary, the SIS project crossed borders to the Bahamas. It partnered with the Island Stewards Camp, which is a Family Island immersion programme for adolescent youth in Over-the-Hill communities of New Providence organised by the Indaba Project and the Bahamas Sportsfishing and Conservation Association (BSCA).

Participating stewards travel to a different family island each summer for experiential learning and cultural engagement. The upcoming camp is planned for Cat Island in July.

The partnership was a natural fit, he said.

Also on the Island Stewards Camp, participants learn to swim, engage in community clean ups, collecting redeemable bottles and aluminum cans for recycling, and learn traditional skills. There is a high level of community engagement and scholarship, and an intensity of activity, said Mr Cleare, which is something the Spelman project team looked to model for their anniversary project.

Dr Gloria Wade Gayles, founding director of the SIS Oral History Project and faculty mentor for Spelman's independent scholars, said in selecting elders, the project deliberately attempts not to repeat a major mistake in African American oral history research of the past: that of collecting only the stories of black women of prominence.

"There is no ordinary story. Every story is extraordinary. Every single story. And it is the coming together of each individual story that we have that volume, those many, many volumes that we have to pass down to the generations. If you have lived to be 65, 75, you have something to teach. So we say, you are important. Your voice is critical to this research," said Dr Gayles.

In addition to the elder conversations, the group visited the College of the Bahamas, where they spoke with professors Dr Nicolette Bethel and Dr Ian Strachan, and the art studio of Bahamian artist John Beadle. They also spent time at the Indaba Project's after-school programme on Fowler Street, where students introduced the scholars to Bahamian ring-play games.

Executive Producer Marion Bethel, of an upcoming documentary on the women's suffrage movement, presented a historical overview to the group and previewed the documentary. Bahamian artist Ancient Man also performed traditional and original rake n' scrape songs for the group, during an intergenerational closing celebration.

The group also hiked along the solemn coastline behind Marshall Road to be introduced to the Haitian story in the Bahamas. Along the jagged rocks the scholars and stewards were called to imagine the many silent stories told by the human debris that sprawled across the coast.

Skeletal hulls from wrecked Haitian sloops, tattered shoes and tangled rope, dehydrated tarp and mangled clothes. The site of the hike is known as a landing site for Haitian sloops, where the Department of Immigration often responds to reported landings. It was a reflective time that opened the way for important sharing and dialogue.

The Island Stewards Camp/Spelman College Oral History Project only lasted four days, but the stories and memories will certainly last a lifetime. The project planted a seed and we are excited to watch it grow.