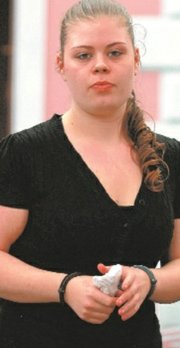 A CONCLUSION is expected in the private discussions between a Supreme Court judge and lawyers in the murder trial of a teenage girl and her ex-lover, who are accused of murdering Anna Garrison in 2009.

The discussions in the absence of the jury, between Justice Roy Jones, prosecutor Ambrose Armbrister and defence attorney Elliot Lockhart, began after Mr Lockhart objected on Tuesday to an alleged DVD recorded interview between a US-based policeman and 19-year-old Madison Pugh being admitted into evidence.

A ruling on the legal issues that arose from the DVD being admitted was supposed to be handed down yesterday after discussions continued.

However, the court stenographer was not present, placing discussions on hold.

Pugh, who is Anna Garrison's daughter, and Zyndall McKinney, 25, Pugh's former boyfriend, are accused of killing Garrison, who disappeared in February 2009 only to be found on Fox Hill Road on July 4, 2009.

McKinney is from Marathon Estates. Pugh is from Pennsylvania, USA. Anna Garrison was living in the Bahamas at the time of her death.

She was found dead in multi-coloured sheets that covered up her decomposed body.

McKinney and Pugh each deny the charge of murder.