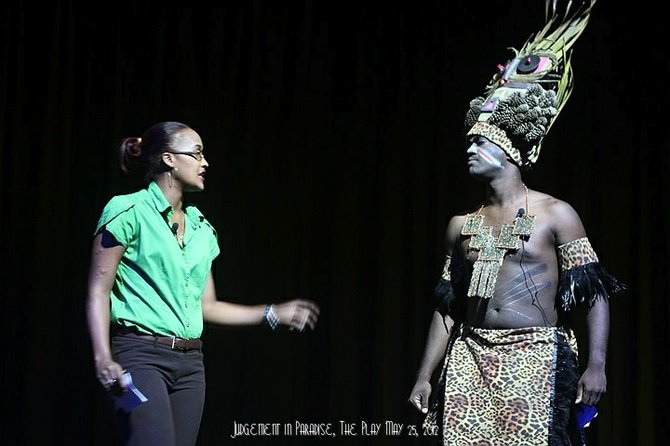 BAHAMIAN social norms are uprooted and set to a Mayan apocalyptic backdrop in playwright Adrian Wildgoose's Judgment In Paradise.

The resulting plot magnifies ideologies of self-governance and religious salvation, as it traces the deterioration of the Willshine family and the surrounding community.

"It feels like my first play; the emotions are fresh and new. To see everything come to life is a magical feeling," said Mr Wildgoose, who is a student at the College of the Bahamas.

He conceptualised the idea last summer, and starting drafting the script at the end of the year. When he finished the script in January the play went into pre-production.

"The cast that I had at first, I had to adjust because a lot of people had different schedules, but I ended up with a great cast, really talented actors some of them performing for the first time, some veterans," said Mr Wildgoose.

Erin Tenniel doubles as the assistant director and the character Terry Smith, a reporter who uncovers a damning prophecy during an interview with a Mayan priest. The prophecy shed light on a flood that would engulf the country on December 21, 2012.

"It has its comedic aspects, but essentially it's a satire and it really interrogates the social issues that are prevalent in Bahamian society today. We have this perspective of the single parent home, normally the father is missing but in this aspect the mother is missing," said Ms Tenniel.

"The father is missing also, as (he is) the Prime Minister and he is never physically there for his daughter," she said.

With the country's fated demise approaching, the play challenges themes of politics and greed.

Former COB Student Union president Anastacia Huyler played the lead role as Destiny, the blind daughter of Christian Willshine, Prime Minister of the Bahamas. Destiny, 24, has an unrequited love for a young man named Chance. Although she confesses her love, the relationship does not materialise because of the apocalypse.

Her negligent and absentee father sold the country to a millionaire in response to the country's debt crisis. The scenario is used as a metaphor for the consequences of self indulgence.

When the flood comes, Mr Christian Willshine forgets about his daughter, while escaping on a helicopter with the millionaire. The play ends on the assumption that everyone except for the millionaire and Christian dies.

The character's names allude to the play's deeper allegorical themes, which challenge cultural attitudes towards religion and politics. Destiny is blind and in love with Chance, while Christian neglects Destiny.

"My character is Shanice. She's basically a Bahamian junglist; very vulgar, very loud, very irreverent. She's the side-chick or girlfriend to one of the main characters in the play, Chance, and she's basically keeping Destiny and Chance from furthering their relationship," said

"Last night was really good. The reception was good and we had a good time. There was a lot of energy and overall people enjoyed themselves and most of all they got the message so I think it went great," she said.

Judgment In Paradise is the Grand Bahama native's fifth production, and the third staged in New Providence. Mr Wildgoose said he mainly draws inspiration from life experience and current affairs as he strives to keep his work relevant and meaningful.

Mr Wildgoose said: "It's an experience that helps me to feel like I made a difference. To see the way the cast takes it and makes it their own to see the impact on everyone that comes and watches it, that's what really keeps me going."

Interested persons will have to wait until next summer for the playwright's next installment. The writer, director and producer will be graduating the COB with a marketing degree in 2013.