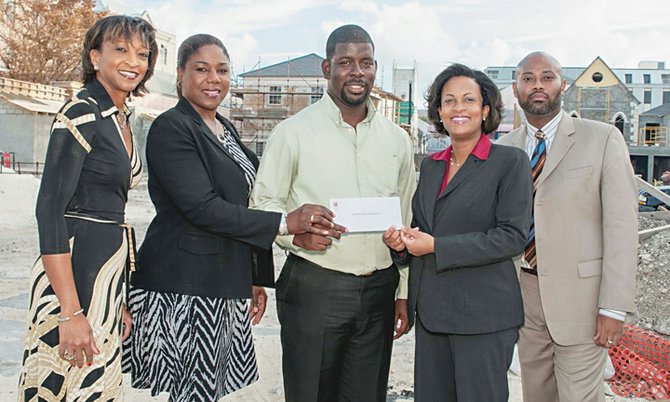 CIBC FirstCaribbean International Bank (Bahamas)has made a $25,000 donation towards the revitalisation of Nassau’s city centre.

“Our donation is significant, not only because of its value, but also because it comes at a time when the Bahamas is demonstrating in a tangible way its commitment to creating an enhanced destination for both residents and visitors that could positively impact the country’s economy.”

DNP project manager, Gevon Moss, said his organisation was pleased with the bank’s contribution to the redevelopment project,

“We are extremely grateful for CIBC FirstCaribbean’s support of the work of the Downtown Nassau Partnership, which allows us to do so much more for all of our benefits,” Mr Moss added.

“We are vigorously working to bring Nassau’s centre alive; to get tourists off of their cruise ships and on to the streets to experience the Bahamas and to create a Bahamian mecca for all. It is a big job, but we are committed to getting it done, and CIBC FirstCaribbean’s contribution is proof of that.”

Following a familiarisation visit to the redevelopment site of the historic Pompey Museum on Bay Street, Mrs Rodland-Allen praised the DNP for choosing to restore the building.

Some 200 years ago, the Pompey Museum, was the actual site of local slave auctions. Now serving as a museum, specifically of slave culture and the history of emancipation in the Bahamas, that history will be restored and serve as a reminder of the country’s heritage.

Sounds. Like a wonderful project. Getting the survey's off the streets should also be a part of the redevelopment as well I think.