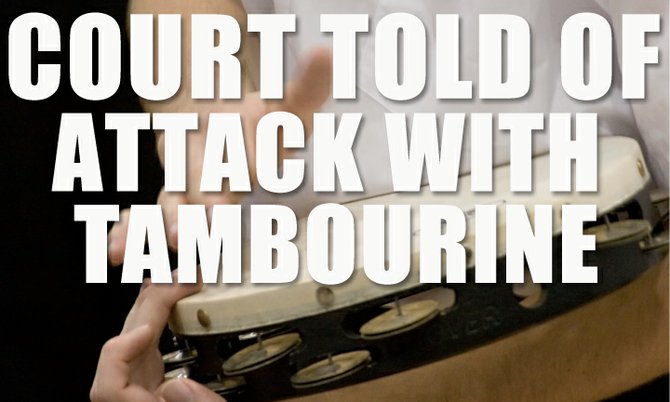 A PRAISE and worship at a church service allegedly turned into an unholy shoving match between church leaders while two women assaulted each other with a shoe and a tambourine.

Sgt Elke-mia Campbell told a court yesterday that she was standing at the back of the Ebenezer Mission Baptist Church observing persons on the pulpit singing when a member seated near her got up, ran to the lightswitch and turned off the lights.

A church officer followed after him and flipped the lights back on, she said.

As the two members were fiddling with the light switch, said Sgt Campbell, she saw 31-year-old Bishop Michael Symonette walk towards the pulpit and move the Lord’s Supper table to the side wall of the church.

She told the magistrates’ court Symonette then tried to remove the altar which is when she saw shoving between Symonette and 53-year-old church board member Zendel Stubbs.

Campbell said she ran to the front of the church to the argument and saw Symonette’s sister, Sharine Symonette, trying to get involved only to be pulled back by 46-year-old church minister Levano Moss’s mother who was shortly afterwards hit with a shoe by the sister before the mother hit her with a tambourine.

Minister Moss went after the woman who attacked his elderly mother and Bishop Symonette, according to officer Campbell, was right on his heels.

Bishop Symonette, Ministers Moss and Stubbs, were in court yesterday on trial as Sgt Campbell recalled what she had seen minutes after she was called to the church on Sunday, September 23.

The three men of the cloth, who are on $1,000 self-signed bail, each face a charge of disorderly behaviour in a place of divine worship.

All three have denied the accusation and pleaded not guilty at their arraignment.

It is claimed that the three committed the offence at the St Charles Vincent Street church during a morning service.

The row allegedly occurred around 8am, minutes into the service, following the announcement that Symonette was chosen over minister Moss by church members to succeed his late father, Bishop Elkin Symonette, as bishop.

Yesterday Sgt Campbell told prosecutor Supt Samuel McKinney that she was at the Grove police station on the morning in question.

“At the time, I was about to take over as shift supervisor for the 8am to 4pm shift when I received information,” the police sergeant said.

She left with two police officers as back-up and headed to the church, arriving at about 8.33 or 8.35am.

“Upon my arrival, I observed Supt Oscar Sands at the front of the church in civilian clothing with several members of Ebenezer Church,” she said.

“I also heard shouting of [the word] ‘theft’ and I heard singing coming from inside the church,” the officer added.

She said church members outside were a bit rowdy and shouting but were talking with Supt Sands.

“I went into the church and stood at the back by the door along with reservist woman ASP Rolle. There was a group of persons on the pulpit singing... parishioners,” she said.

“What was the atmosphere inside the church like at the time,” Supt McKinney asked.

The three accused were in the church on the day, she said.

“Initially, one of the members seated where I was, Elkin Collie, went up to the pulpit and was soon joined by another pastor. He went to the front of the church and switched off the light.

“Pastor Moss and Stubbs were on the pulpit. Pastor Symonette was 15 benches or so on the side from where they were switching the lights on and off,” the officer said.

“I observed pastor Symonette walk towards the pulpit and move the supper table. He took the table and put it at the side of the church against the wall,” she said.

Symonette then tried to remove the altar, she said.

“I observed pushing between pastor Symonette and Stubbs. As a result, I ran to the front of the church,” Campbell said.

“Why did you run to the front of the church?” prosecutor McKinney asked.

“Because I saw pushing as though they were in a fight,” the officer said.

“How did they appear to you? Their mood?” the prosecutor asked.

By the time she got to where they were, a good distance away from where she was, the pushing had stopped, she said.

Campbell said Sharine Symonette tried to get involved only to be pulled back by Moss’s mother. The younger of the two church members reportedly took off a shoe and hit Ms Moss before Ms Moss hit back with the tambourine that was in her hand.

Campbell said that they were all stopped before things could take a turn for the worse and all five were arrested.

The officer said she was aware of an unresolved dispute over the leadership of the church.

In cross-examination, attorney Michael Kemp, who represents Moss and Stubbs, asked the officer what she understood the word “divine” to mean.

Mr Kemp asked her if she knew the second and last books of the Bible, and the officer answered

“In your investigation, does it have that pastor Symonette had a screw driver inside the church?” the attorney asked.

“Pastor Stubbs and Moss were up on the pulpit?” Mr Kemp asked.

“Pastor Stubbs, Pastor Moss and several others were up there singing,” the officer answered.

“And they were singing the song ‘Stand Up, Stand Up for Jesus! Isn’t that right?” the attorney asked.

“I don’t remember,” the officer said.

“Was it song from the hymn book or a hip-hop culture song?” the attorney asked.

“I don’t recall but I believe it was a religious song,” Sgt Campbell said.

“This Elkin Collie you mentioned, why was he not arrested?” the attorney asked.

Sgt Campbell said that she didn’t arrest him because she did not know who had proper authority of the church and based on previous disputes and her own knowledge, could not make a proper judgment.

“What it appears to be is that you were acting in cahoots with Elkin Collie,” the attorney said.

“You allowed him to leave a seat to cut the lights off. Why didn’t you lock up Elkin Collie?” the attorney asked.

“And you didn’t arrest Sharine Symonette because she has heart problems and cancer,” the attorney suggested.

Referring to her evidence that Symonette had moved the table, Mr Kemp said: “Why didn’t you lock him up right then and there?”

“The police of Grove station do not know who the true authority of the church is,” the officer said.

“I’m suggesting you were in gross dereliction of duty. You let this matter escalate out of control,” the attorney said.

Magistrate Archer addressed the witness: “Do you agree or disagree with counsel’s suggestion?”

“You saw a man sitting on the side of you get up and switch off the light. Why didn’t you nip it right in the bud? You’re a peace officer in the house of the Prince of Peace, why didn’t you go and stop that young man cutting off the light?” the attorney asked.

The officer did not answer.

“To your knowledge, did all hell break loose when the devil came in there with Elkin Collie?” the attorney asked.

The prosecutor said the witness would not be able to answer the question.

The attorney rephrased it: “Isn’t it true that something came in there and disturbed the peace?”

“You’re aware that the father didn’t want his son in charge of the church?” Mr Kemp asked.

“Would it be correct to say that when you arrived, you didn’t see the service called to order?”

“No I didn’t,” officer Campbell said.

“At the time of him doing this, there was no altercation?” the attorney asked. Officer Campbell said: “Right.”

“I suggest to you as he attempted to remove the pulpit, he didn’t interrupt or hit anyone,” the attorney said.

“I did not see who hit whom first. I only observed pushing and shoving,” Campbell answered.

“Your evidence is that minister Moss went at Sharine Symonette?” the attorney asked.

The officer said yes and said she saw Symonette follow after minister Moss.

“I suggest to you at some point he left the sanctuary and went to his office,” the attorney said. Officer Campbell said: “Yes ma’am.”

“He was cooperative and respectful throughout?” said the attorney.

“You accept that he did not resist arrest?” the attorney asked.

“When I informed him that he was under arrest, he verbally resisted arrest and turned away from me,” the officer said.

“Wasn’t it Supt Sands that initially called the Grove Station asking for you to come down?” the attorney asked.

“I wasn’t aware of that call,” the officer said.

“So from your evidence, you didn’t see Symonette initiate any physical contact? You agree?” the attorney asked.

The trial was adjourned to January 29, 2013 when the prosecution will present its final witness.

What kind of point was Milcheal Kemp trying to make? He is asking a witness, who happens to be a police if she knows what divine means and what is the second and last book of the bible, what does that have to do with being a witness to a crime? This police could have been an athiest who never step foot into a church or neverread the bible, the point is she was a witness. The judge should have stop him in his tracks with those questions.

what a natural disgrace