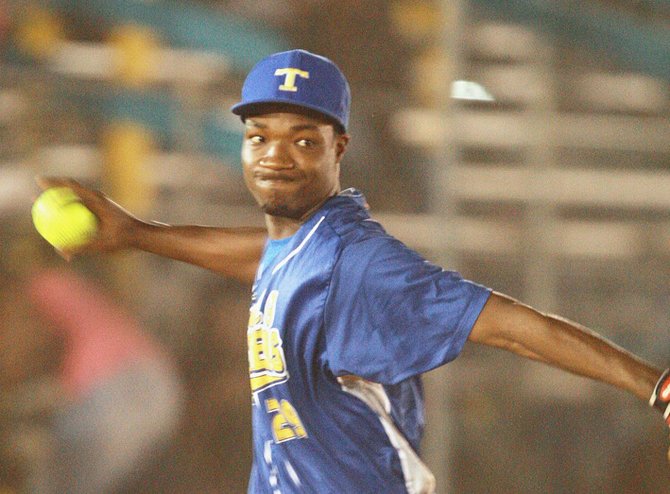 The Bommer G Truckers and the Dorin United Hitmen are positioning themselves for a return trip to the New Providence Softball Association men’s championship series.

In the Banker’s Field at the Baillou Hills Sporting Complex on Saturday night, the Truckers steamrolled past the Blue Chip Buccaneers 13-4, while the Hitmen blasted the YII Shipping Bulldogs 26-5 as they both took a commanding 2-0 lead in their respective best-of-five playoffs and could wrap it up with a sweep on Tuesday night.

If they do, the Truckers and Hitmen could make it a double whammy as they join the Bommer G Lady Operators and the Lady Hitmen, who have already clinched their showdown for the women’s championship title. The two winners from the championships will advance to represent the NPSA in the Bahamas Softball Federation’s National Round Robin Championship series that will be played at Baillou Hills at the end of October.

Here’s a summary of the two men’s playoffs on Saturday night:

In what started out as a close encounter in game one with Bommer G holding onto a slim 5-2 decision, the Truckers stepped it up a notch in game two and made it look like the match-up worthy of the pennant winners facing the fourth ranked team.

Blue Chip only managed to hold onto a slim 4-3 lead after the first inning. But they watched helplessly as Bommer G went to work, scoring four runs on one hit in the second, another run on three hits in the third and three more on two hits in the fourth to break the game open with a 10-3 cushion.

The Bulldogs didn’t score again until the fifth as they cut the deficit to 10-4.

But with one out in the sixth, the Hitmen got the bases loaded after manager Perry Seymour was ejected from the game by base umpire Lawrence ‘Buddy’ Smith for unsportsmanlike conduct. The incident stemmed from plate umpire John Woodside getting into an argument with a fan, prolonging the already stretched out game.

Ramon ‘Shaky’ Johnson came through with a two-out single, scoring Olando McPhee and Marvin ‘Tougie’ Wood. Darren Mortimer got a run-producing single to plate Terran Wood. But with the bases loaded again as Bommer G batted around the clock, Ramon Storr grounded to end the rally.

Adney ‘the Heat’ Bethel went the distance for his second straight win in the series. He tossed a seven-hitter and struck out 11 batters as Deval Storr suffered the loss on 12 hits and seven strike outs.

“They are down two games, so their confidence is going to be down too.”

The Buccaneers got a 2-for-3 outing with a run from Greg Gardiner and 2-for-2 from Angelo Dillette.

“I think we’re getting some bad breaks all around,” Dillette said. “They got rid of the other umpires and certain persons who they put behind the plate, I’m not saying they are cheating, but the calls have been lopsided. Adney pitching the ball up and he’s getting the calls. My pitcher is also pitching the ball up, but he can’t get the calls. Thursday night, even though we lost, it was a more balanced game. We were just short handed because a couple of my games couldn’t play.”

As he looks ahead to game three, Dillette said they are definitely looking at trying to avoid the sweep.

“If the game is called down the middle, we can come back,” he said. “We were throwing the ball just like Adney tonight, but we just didn’t get the calls.”

After taking game one in a 13-0 shutout, Dorin United doubled up YII Shipping, but they also had a little bit of mercy and allowed them to score this time.

The game was actually over from the first inning when the Hitmen raced out to a quick 8-0 lead in the top half of the frame on three hits as they batted around the clock for the first of three opportunities, thanks to a two-run double from Jamiko Sands and a RBI single from Geron Sands.

After giving up a run in the bottom on an Adrian Pinder RBI double that scored Garfield Bethel, the Hitmen went back on an offensive tear in the second with 11 runs on seven hits for a 19-1 rout in their second trip around the horn. This time, William Delancy had a two-run single, Kieron Munroe a two-run single, Hosea Hilton a two-run double, Alcott Forbes a two-run home run and Everette Neely a RBI double.

The Bulldogs tried to extend the game a little longer by scoring three more runs in the second, sparked by a two-run in-the-park homer from Shaun Adderley and a RBI triple from Angelo Butler,

With their lead dwindled to 19-4, the Hitmen regained their composure by getting seven more in the third as Alcott Forbes had a RBI walk, Rashad Seymour a RBI double, Everette Neely a RBI single and Kieron Munroe a RBI triple to put the game back out of reach as they marched around the clock again.

But before the game was done, Jordan Gibson led off the third for the Bulldogs with a triple and scooted home on Shaquille Delancy’s RBI ground out.

Alcott Forbes held the Bulldogs to just four hits with five strike outs for his second win in the series. Shaun Adderley got the starting nod and gave up 10 hits with two strike outs in two innings before he was relieved by Angelo Butler, who gave up another six hits in just one innings.

Game three on Tuesday has the Bulldogs facing the Hitmen in the 7pm opener, followed by the nightcap between the Buccaneers and the Truckers. If necessary, they will play game four on Thursday.