A new video conference system that will allow certain criminal cases to be conducted by video, is set to save the government millions of dollars and cut down on the “traffic hazard” caused by transporting prisoners to court. 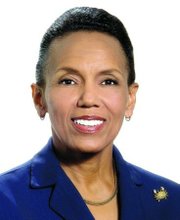 Attorney General and Legal Affairs Minister Allyson Maynard-Gibson was present yesterday for the “historic” announcement of the new video conference system that cost the government “less than $50,000” to install.

Items such as bail applications and arraignments may now be conducted by video, Mrs Maynard-Gibson said, with the video-conferencing system having links to Her Majesty’s Prison, the Public Hospital Authority, the Department of Rehabilitative Services, the Attorney General’s office, and the Legal Affairs Ministry in Freeport, Grand Bahama.

“It is of particular importance in the history of The Bahamas for the Swift Justice Initiative which was relaunched on June 6 2012,” she said, noting that representatives from these locations will now be able to hold meetings by video conference.

Mrs Maynard-Gibson continued: “This historical event symbolises a red letter day in the administration of Justice in particular the criminal and civil, but in this instance, we are focusing on the criminal side as we plan to extend the use of video-conferencing in the civil side in the very near term.”

The unveiling of the new system marks “the first time” in Bahamian history, she said, that the country now has a “secured justice system network” between the agencies involved in the administration of the justice system.

“The relevant people in the administration of justice have also agreed that bail applications, remand hearings, arraignments and criminal case management may be conducted by video link,” Mrs Maynard-Gibson said.

“This will substantially eliminate the traffic hazard too frequently caused by the transport of prisoners and persons on remand from prison to court. Only persons required for court on a particular day will be brought down from the prison.”

The video-conferencing link will also allow for the government to “realise tremendous savings” and reduce the amount spent on travel, accommodation, transportation and daily expenses for witnesses and experts – whether local or abroad.

“Expenditure on these items account for a large part of the budget of my Ministry,” Mrs Maynard-Gibson said, noting witnesses and experts will be able to give live testimony by video, whether they are in The Bahamas or outside.

Forensic evidence can also be displayed on the screen and the video link with the Public Hospital Authority will allow doctors to give live testimony without having to attend court because of their “heavy schedules and demands,” she said.

“Going forward it is the government’s intention to expand video-conferencing to Abaco, Eleuthera, and Exuma in the next phase so that our prosecutors and civil litigators will be able to interview witnesses in these islands without them having to be transported to New Providence,” Mrs Maynard-Gibson said.

“The courts in these islands will be able to undertake further remand hearings remotely or by video link.

“This video network will be complementary to the Integrated Criminal Justice System Software that the government is in the process of acquiring and this technology will bring about further improvements in the efficiency and effectiveness from my Office in the administration of justice.”