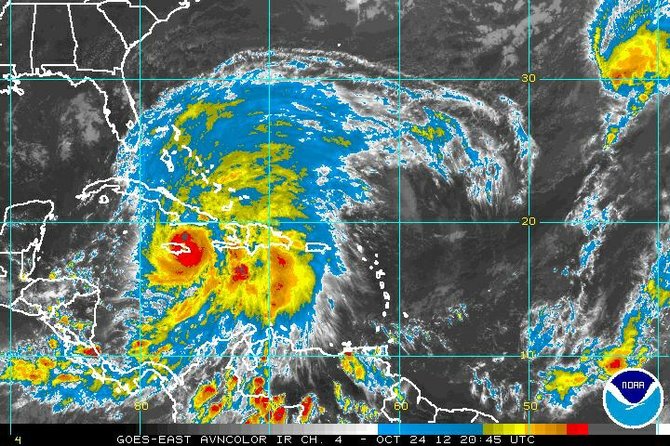 Hurricane Sandy is approaching the southeastern coast of Jamaica.

A hurricane watch means that hurricane conditions are expected somewhere within the watch area in 48 hours.

At 2 p.m. the center of Hurricane Sandy was located near latitude 17.6 degrees north and longitude 76.8 degrees west or about 30 miles south of Kingston, Jamaica or about 320 miles south-southwest of Ragged Island.

Hurricane Sandy is moving toward the north near 14 miles per hour.  This general motion is expected to continue through Friday, with a slight increase in forward speed later today or tonight.  On the forecast track the centre of Sandy is expected to move near the Central Bahamas early Thursday morning.

Maximum sustained winds have remains near 80 miles per hour with higher gusts.  Sandy is a Category One Hurricane and additional strengthening is possible before Sandy moves over Jamaica or eastern Cuba.

Tropical storm conditions are expected to begin affecting Long Island and Exuma by 6a.m. Thursday morning then spread over New Providence around 1p.m. Thursday before pulling away from the Northwest Bahamas after 9a.m. Saturday.

Storm surge as much as 4 to 7 feet above normal tide levels is likely in the warning areas.

Residents in the warning areas should brace themselves for strong gusty winds and flooding in low-lying areas.  All precautions should be taken without delay to secure your windows, outdoor furniture and remove debris, which could become flying missiles in strong winds.