Mortimer Removed From Blta Executive Board 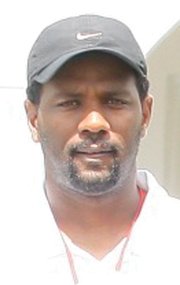 The Bahamas Lawn Tennis Association (BLTA) stated that first vice president Dentry Mortimer has been removed from the executive board and as chairman of the junior development programme with immediate effect, according to a press release late Wednesday night.

When contacted yesterday, BLTA president Derron Donaldson declined to give into any further details, only saying that after an emergency meeting on Wednesday night, the executives decided to remove Mortimer from office and in short order they will make an official statement on the reasons why.

Asked whether or not it was something that was brewing between Mortimer and the executives for a while, Donaldson would only say: “I could say yes and I could say no. It just happened last night (Wednesday) and we got the information out to the press immediately after we sent him the information.”

Mortimer, who spent five months in office working with the junior development programme, confirmed that he was informed about the BLTA’s decision about a hour after he left the meeting.

When contacted about the matter, Mortimer was adamant that he may have been a victim of circumstances because he felt that he challenged the executive board on a number of issues, including the re-construction of the junior development programme at a meeting that was held on Monday, September 27.

“The president asked me my position and the way forward with junior development,” Mortimer said. “I informed the entire board that I was never notified of a meeting held on Monday where the decision was apparently made by the board to re-construct junior development.

“I went on to say now that the board has made their decision, I have made mine and my decision is to not be a part of the junior development programme under the governance of Kim O’Kelley and Giorgio Baldacci, a non-Bahamian and a 78-year- old retiree.”

Mortimer, a former junior national team player who went on to represent the Bahamas at Davis Cup, said many board members in the meeting challenged his decision and said that they believe the construction of the letter was formulated on the wrong premise and that if the words governed was removed, they believe he would remain on junior development.

“I said yes I would remain on the junior development programme and assist with the programme as is my passion if those words were removed because I cannot and will not work under the governance of these two individuals - Kim O’Kelley and Giorgio Baldacci.

“At that point all of the members became silent, which was proof that this was not their understanding and I maintained my position that I will remove myself from the negativity and the power struggle because I am only here to serve the people and assist in the development of tennis in the Bahamas and will remain as the elected first vice president.”

Mortimer, however, said that there were a number of meetings held and issued discussed that he was never informed about because he was not included in the inner circle of the executives that comprised of Donaldson, O’Kelley, who is a director, and Barbara Carey, the secretary.

Mortimer said he was also very surprised that female player Nikkita Fountain was appraised of matters when he wasn’t and although she wasn’t an executive member, she attended the meeting on Wednesday. Her presence, he said, was one of the reasons why he left the meeting because there is a personal vendetta between the two of them.

Donaldson would not confirm or deny any of Mortimer’s allegations, only to say that in short order the BLTA will inform the media, either through a press conference or a press release, their complete scenario as it relates to the removal of Mortimer from office on Wednesday night.

When something that Mr. Stubbs doesn't agree with is written he takes the decision to remove them from the posting. It only goes to show that people associated with these organizations can't handle the truth. The BLTS has time and time again proven how silly it can be in its policy and Mr. Stubbs if you had any sense of duty to journalism you would investigate more thoroughly. But hey that's the way we roll in the Bahamas. Silence those who say what needs to be said.