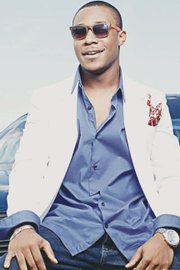 THE BAHAMAS may be known as a small Caribbean country, but the talent that it holds is “out of this world” .

Amongst those talented individuals is the artist known as “CJ Priest”, a man with a gifted voice and a purpose.

As a young child, he became interested in music by singing in church with his father, he told In Ya Ear. Playing the drums and making use of musical instruments, CJ says it was being around music itself, that kept him inspired.

“My uncle, my mother, my grandmother, everyone could play an instrument and sing so I couldn’t run from it and I always had a love for singing,” he said.  CJ is second in a line of talented men, his singing career began under the eye of his father, who formed a gospel group called “The Soul Winners”. This group became a fulfilment of CJ’s childhood dream of performing music.

Becoming a recognisable face amongst music lovers, his songs are described as “food for the heart and soul,” with positive themes and creative lyrics. Discovering his stage name from his birth name, Charles Gardiner Jr, CJ added “priest” to reflect his belief in his life purpose.

With twenty songs out to date, all self-authoured, CJ said his favourite is “Amazing”, while his most popular songs are: “One Sided Love” on the Ting ‘Em Riddim produced by Soljah Shaddy; “Tonight is Yours”, which was recently released; and “Pick Me”, a collaboration with Sammi Starr and Sketch.

“At the present time, I’m focusing on my studio work and putting a single out,” he said.

Being a huge fan of reggae and dancehall artists Tarrus Riley, he said it would be great to one day work with the star.

“I plan to go as far as God will allow me to take it, and hopefully that means to the world. How I see it is, music is music and there is always a market for music no matter what style, who sings it and what they sing about. It is up to us to get it there,” said CJ.

Speaking about his recent

“I’m Taken” song with up and coming Miami artist Selena Serrano, CJ said the song was inspired by actual events that happened to him.

“I thought to myself, I know I’m not the only person who has been through this, so I wrote about it and hopefully someone can relate,” he said.

He said the collaboration with Selena came about when he decided that he wanted a female voice to complete the track. “I was listening to a riddim that came out, called the Bird’s Eye Riddim, and I remember her having such a beautiful voice so I talked to my producer at the time, Ray R. Ewing of BuffBoo Music to set it up and he did,” said CJ.

All CJ Priest fans can locate the song on iTunes, Youtube and reverberation for download. He said the response to the song has not been what he wanted but he is indeed happy with it because the few people that are reaching out, are the ones that he is supposed to connect with.

CJ Priest does not have a current album in stores, but he said he is definitely working towards one. “I am transitioning to a new sound, season and music in my life so once it is time to release it I will,” he said.