Bahamians Chefs Go To The Olympics 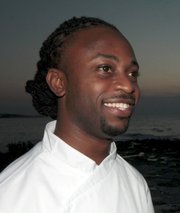 NOT everyone sees the culinary arts as a form of “fine art”, but that does not matter to two local chefs, who are gearing up to compete with the best chefs from around the world.

Just weeks before their journey to Erfurt, Germany for the Culinary Olympics, the two Bahamian Chefs, Sheldon Sweeting and Ron Johnson, sat down with Tribune Entertainment to share the joys of the culinary arts. 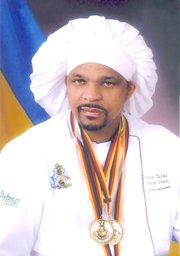 As a private chef, Mr Sweeting said he is allowed to get as creative as his imagination takes him, when it comes to preparing food. He said the whole thrill about going to the Olympics, is for that cutting edge experience.

“As a chef, I am in awe sometimes of what other chefs do with food because you know everybody thinks differently. And to see how people think and how creative one can be, is amazing. Nowadays there are so many different products to add to food to give it a different texture and flavour, all these configurations is what makes the creative process so unique,” said Chef Sweeting.

He said he becomes fascinated with everything when at the Olympics. From the sculptures that the international chefs create, to the many food platters. He said it is the simplicity of the work that grabs people’s attention.

Chef Johnson agreed with his partner and said when it comes to food, the creativity can be boundless. With the addition of new techniques and additives available for chefs nowadays, he said it is all up to them what they do with their talent.

When asked about the similarities between culinary arts and other art forms, Chef Sweeting said that it is just another expression, no different than a musician’s work. The key is to have the passion and desire for what you are doing, he said.

“Once you have that, it drives you and that is what propels me to even do this because I love what I do and I have a passion for this. That is what keeps me eager to want to learn more. It doesn’t make sense having a career and you don’t put your all into it.If you just settle for mediocrity, than you would just be a chip off the old block and I don’t want to be that,” said Chef Sweeting.

Comparing craft to the art of painting, Chef Johnson said:

“The only difference between this and a painter is that their art is displayed on a canvas and the person gets to view their work for an indefinite amount of time. Whereas chefs, they create art on a plate and the difference is that the art is consumed within about a half hour, but it is the same drive and motivation.”

He said his inspirations comes from the native cuisine of the Bahamas. Trying classic dishes on a regular basis, Chef Johnson said he tries to fill voids that are also here. Voids in terms of creating things that he has not seen done in Nassau.

“Dishes and techniques that you would see on Iron Chef or in some sort of competition. We tend to be so closed in, in the type of cuisine that we see and we serve. So I keep abreast to what is going on and that influences me to make my dishes,” said Chef Johnson.

For Chef Sweeting, he appreciates seeing how far he can push himself. He said he has grown in food for the last four years, and working in private homes has allowed him to explore many things.

“Some of the ingredients I am using, I have never used before. It opened up a whole different avenue for me. Whatever I see and I want to do, I put my mind to doing it and that sparks the creative juices for me,” said Chef Sweeting.

He said he finds himself being more creative with seafoods and vegetables, because there are so many things people can do with the two.

“I have this tomato dish I am doing for the Culinary Olympics and if you see it on the plate, you would think, is that tomato, look like that? It is amazing what you can do. Ron and I are using food additives now, and that opened a whole different box of tricks because I’ve never used agar agar before and that is like a gelatin, but you can heat it.

Things like this keep me interested, doing things I’ve never done. I have been practicing for the last day and a half. These things force you to get into it and be creative with it and I am excited,” said Chef Sweeting.

He said he just wants to go and represent his country, but also learn and experiment. Chef Sweeting said his ultimate goal and dream is to win a gold medal at the Culinary Olympics. Chef Johnson said it is an honour to go and showcase what the Bahamas has to offer.