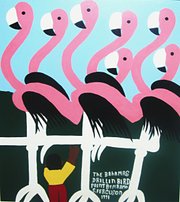 The National Art Gallery of the Bahamas (NAGB) is set to wrap up its signature “Amos Ferguson: Bahamian Outsider” exhibition next month. However, the collection’s showing at the NAGB will not be the end of the road.

Since the opening of the exhibition in May, a steady stream of art lovers have visited the gallery to see the large cross section of over 150 works by Amos Ferguson.

Although the majority of the pieces will be returned to private collectors, who loaned them out, around two dozen pieces will stay in residence with the NAGB, said Amanda Coulson, NAGB director. Around four pieces will rotate with the work of other Bahamian masters in the gallery’s permanent collection.

“Amos Ferguson was a much-beloved man for his personality and humanity as much as for his art. He was quick to laugh, had a sparkling eye and a mischievous sense of humour. In his lifetime he was not as appreciated for his art as he could have been, so to finally have a major retrospective at the National Art Gallery was a vindication for many of his long-time supporters,” said Ms Coulson, speaking about the success of the show thus far.

With only weeks left before the close of the show on October 28, visitors are still coming in.

“Hopefully for years to come, we will see more Amos Ferguson shows and exhibitions to create more of an understanding and an appreciation for how he really did put the Bahamas on the map as far as art goes,” said Jordia Benjamin, NAGB assistant education officer.

“(People who attend the NAGB) have a new found appreciation for the man himself and they are captivated by his dot techniques. He has little intimate dots that he use in designing his flowers and birds. That captures a lot of attention,” she said.

Amos Ferguson was self-taught and became known all over the world. Ms Coulson said he made a lot of money but stayed living in the Grove, supporting the community with his largesse. This also made him a mythic figure of Bahamian self-determination, pride and generosity, adding to his popularity, she said.

“What’s interesting for me now though is that a lot of people who did not like his art so much, saying it was naive or childish, have been through the show and reflected upon it and have said that now, seeing so many all hung side-by-side, they finally realized how hard it actually must have been and the level of dedication he had to his craft,” said Ms Coulson.

“We have had lots of families come in, as well as school groups. However, to paint like him is actually quite difficult, and so we set up an interactive section where you can try to paint like Amos using his techniques to see how hard it is. This has also been a really fun part of the show for visitors with children. We also made an Amos Ferguson colouring book,” said Ms Coulson.

The Director said she welcomes having as much of the Bahamian heritage on show all the time for locals and visitors, as long as the work is in a secure, climate-controlled environment and the gallery is absolutely sure that the work cannot be damaged.

“Our collection of Amos Ferguson’s was carried out by hand, one by one, from the Pompey Museum the first time it burned down, so those paintings have already survived quite some drama and seem to be protected by a greater force than the NAGB,” said Ms Coulson.

Even though she said it makes her anxious if the gallery’s collection is not at home with them, she also said she think it is a shame when it is all in storage because there is not enough space on the own walls. For this reason she is open to loaning the collection out.

“We have loaned works to Government House, for example, so visiting dignitaries might see our wonderful artists, but I would also love to see some of our collection in more public areas where the Bahamian people can enjoy it and be proud of their culture and heritage,” said Ms Coulson.

Ms Coulson said the next temporary show for the gallery will run form November 15 to April 7, 2013. This will be the sixth national exhibition. The subtitle of the show is ‘Kingdom Come’ and will feature both mature and young Bahamian artists.