THE return of the African father to the family is an important condition for establishing peace, suggested cultural scholar Dr Jahlani Niaah at the Bahamas Crisis Centre’s Peace Conference last week. 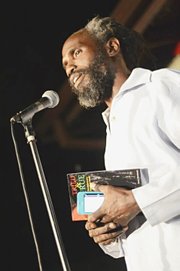 Sharing insights from the Rastafari community, Dr Niaah, who is a lecturer at the University of the West Indies, recognised that the movement in all of its diversity is not immune to the “patriarchal norms and social dynamics” that affect gender relations in the wider society. Therefore, domestic violence and other elements of patriarchy are present in the movement.

However, he said, Rastafari presents a model of masculinity that affirms the African male and elevates cultural solutions and dialogues, which he said is critical to bringing resolution to common struggles.

He said the Rastafari movement is “invested in interpreting and solving problems encountered through western colonialism”, particularly the negative perception of African masculinity.

In the context of peace, Dr Niaah said the reaffirmation of the male is important, because statistics have shown that violence against women “is directly related to the absent father” and the conventional western socialisation of the African male.

Importantly, he said, the Rastafari approach is born from an African imagination that challenges the logic “conceived by the colonial masters”, and represents a return to “principles of nature and natural living within creation”, said Dr Niaah.

A high value, for example, is placed on education and intellectual development for the African male within the Rastafari community.

The concept of reasoning describes the intellectual practice of questioning and interpreting self-concepts and societal norms within Rastafari.

Reasoning is a central activity, especially applied to fashioning “solutions to systemic western problems”. In fact, “reasoning is ritualised” inside the Rastafari community – and is the same ritual space where cannabis is used, said Dr Niaah.

Rastafari also places a high value on family and community, said Dr Niaah during the conference.

He used an example from the Bobo Shanti tradition to demonstrate how Rastafari men are called to be present in the lives of the family.

Bobo Shanti is one of several organised orders within the Rastafari movement. Many other groups are decentralised and highly personalised.

“For the Bobo, domestic and ritual spaces are contained together within a commune of several dozen families,” said Dr Niaah.

During times of menstruation, women and men live separately; this requires men to play a central role in the domestic space.

“The separation forces the man to minister to his family. He has to provide food and nutrition to women who are menstruating, and he has to take care of the male children who are left in his care. He has to be present to compliment the duties and responsibility of the women,” said Dr Niaah.

“The idea is that the Rastafari, recognising the denial of the African father and the consequences of that, seeks to restore it through African principles that are genderised. So in essence, you have a patriarchy and a matriarchy,” said Dr Niaah.

A further concept of African masculinity is provided by the Rastafari through Ethiopian Emperor Haile Selassie I, who is a central figure to Rastafari, seen as the inspiration for the movement.

Haile Selassie I is known in popular culture through the music of Bob Marley.

Most notable are the words of Haile Selassie I in the song “War”: “Until the philosophy which holds one race superior and another inferior is finally and permanently discredited and abandoned, everywhere is war; and until there are no longer first-class and second-class citizens of any nation; until the colour of a man’s skin is of no more significance than the colour of his eyes; and until the basic human rights are equally guaranteed to all without regard to race, there is war. And until that day, the dream of lasting peace, world citizenship, rule of international morality, will remain but a fleeting illusion to be pursued, but never attained.”

While the colonial context saw the African male as “marginalised and absent”, the Rastafari through Haile Selassie I affirmed a new image of the African father.

“His Imperial Majesty represents a symbol of hope and fulfilment of a standard that was previously unseen by Africans,” said Dr Niaah.

Through his participation in the conference, Dr Niaah said, he hoped to stimulate a “commitment to the elevation of cultural solutions and dialogues for the engagement and resolution of common key challenges”.

He hoped participants learned a little about the way in which Rastafari recognises the importance of restoring the figure of the father as a way of engendering peace.

Dr. Niaah is absolutely correct. The current definition of the African male in a post-colonial has to be destroyed and rebuilt. In general, we have defined masculinity as being anti-intellectual, anti-social, womanizing and rebellious and we are reaping the harvest.