Support For Activist Grows On Internet 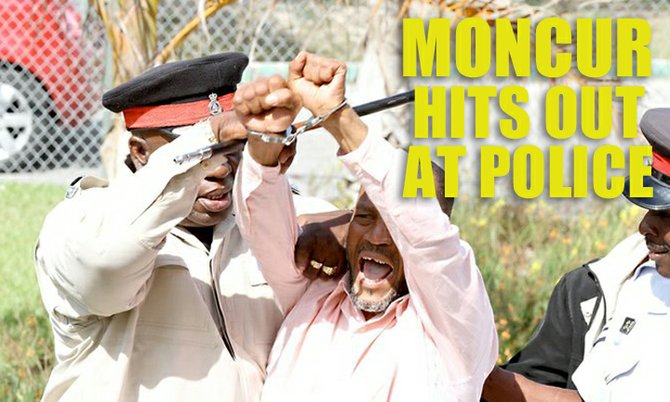 ACCUSING the police force of double standards, Rodney Moncur said if he must face charges of posting “indecent photos” on the internet, so should the police officers who allegedly circulated the gruesome crime scene images of murder victim Nellie Brown-Cox.

Amid growing public concern about the police’s new internet censorship policy, the Justice of the Peace and human rights activist challenged Commissioner of Police Ellison Greenslade to be consistent and bring the photo leak officers to justice.

Moncur has been charged with “committing a grossly indecent act” by posting a picture of a man who died in police custody on his Facebook page.

There has been a huge response on social media to his arrest, with a Facebook group called Free Rodney Moncur gaining more than 4,000 members and Rodney Moncur’s name trending on Twitter. A number of people raised concerns over freedom of speech, and also raised the question of the crime scene photographs in the Brown-Cox case.

“I have been arrested for photographs,” Moncur said. “The Commissioner of Police promised us when the Nellie Brown-Cox photos were released – he said he knew who did it you know – and he is going to take action, and he’s going to tell the public.”

During a radio interview in July 2011, Commissioner Greenslade confirmed that the leak came from within the police force and said he was almost ready to make a decision on the investigation.

“We have done extremely well (with the leak investigation). I indicated to some press colleagues a short while back that the file is on my desk being carefully reviewed. I will be making decisions very shortly, and I will make a public pronouncement once a decision is made. I am not going to be rushed into making a decision until I am satisfied I have done my due diligence. I am almost there,” said Mr Greenslade.

Police officers who are found to be in breach of protocols could face “severe disciplinary action,” including dismissal from the force, he said.

But, Moncur noted, “To date, the Commissioner of Police has not reported to the public. And since it is officers of the Royal Bahamas Police Force who did that, what is he going to do about them?

“It is double standards.”

The crime scene photos leaked by police showed a blood-stained apartment with Nellie Brown lying dead on the kitchen floor, several parts of her body hacked off. Other photos showed some of those severed body parts in other rooms of the apartment.

Moncur is accused of posting on Facebook autopsy photographs of Jamie Smith, a man who died in police custody last month, and the buttocks of another man who is claimed to have been beaten by police. The photos have since been removed.

Mr Moncur told The Tribune last week that had Police Commissioner Ellison Greenslade asked him to remove the photos he would have. He insisted that his arrest was unwarranted.

Since Mr. Greenslade’s insistence last week that anyone caught posting “lewd” or “obscene” photos online – including those of injured or dead people – would be arrested and tried before the courts, members of the public have questioned whether police should have the authority to undertake this kind of censorship.

Commenting on www.tribune242, many readers also questioned why those who emailed photos of Nellie Brown have not been brought before the courts.

Toolegit242 said: “If I can remember quite vividly, when the pictures of the late Nellie Brown were exposed on the internet by a police officer, Greenslade said with his own mouth, that he will find out which of his officer did that and he would work swiftly to have them prosecuted. He has yet to do it.”

ScaredinNassau wrote: “Will a journalist fear publishing now? The Bahamas is fast becoming a police state. Citizens and visitors alike should truly fear this policy. When will the police who posted pictures of Nellie be bought to justice?”

Some fear the Commissioner’s explanation of what would be barred material was so vague that it would stifle the freedoms of the citizenry.

TalRussell used the example of posting photos of bodies at funerals saying: “I am sure the sensibilities of many Bahamians were offended by the way the mortal remains of murdered Handbag Designer Harl Taylor was displayed at his viewing, with him sitting up in his office chair behind his desk, and not stretched out in his coffin. And I don’t remember the police dispatching their officers to the Funeral Home to arrest the loved one’s of the late Comrade?

“No crime was committed and no damn ‘sensitivity police’ had to be go arrest no one,” he concluded.

I did not grow up in a communist country and Mr. Commissioner sir, I will not die in one. What I post is none of your concern. Free speech is exposing police brutality and I applaud that effort. If the family wishes to sue Mr. Moncur then ok, but my police force is not the KGB and cannot monitor my internet activities. Makes me wonder if Greenslade is as smart as as has been touted. Or if he is just ignorant of the concept of Freedom.

PLACING RODNEY IN HANDCUFFS WAS SO UNNECESSARY. IT EVEN LOOKS AS THOUGH THE POLICE IS READY TO KNOCK HIM TO THE GROUND IF HE MAKES A MOVE. RODNEY IS NO CRIMINAL. GO OUT AND FIND THE MURDERERS, ROBBERS, RAPIST AND OTHER CRIMINAL OFFENDERS BEING A MENACE TO SOCIETY. GET THEM OFF THE STREET INSTEAD OF MAKING A BIG ISSUE OVER AN INTERNET ISSUE.

A defiant Comrade Rodney.The man does got's more bullocks that the entire PLP cabinet is displaying to Bahamians, by them not ordering the Commish to enforce the peoples vote against all of them numbers 'bosses" (commission paid agents), who still running around Bahamaland "illegally" selling them numbers just like before the vote, acting like them is too damn big for the policeman's to arrest and jail their backsides? Seems they're right?

So what they do? They lock up Comrade Rodney, while they drive him back to the station, right pass the sellers and they think the people go'in respect them. I don't think so. For all we know, some them may even be buying these same 'illegal" numbers from sitt'in right inside the police cars?

Has the Commish ever arrested and charged a policeman for knowingly buying they numbers, in uniform?

I just feel so very, very SAD over the total nonsense happening in this country right now. Why would they treat this man in this manner? Why don't they go after real criminals this way????

police please stop this mess, this is not serious and you are getting the opposite effecthttp://tinyurl.com/c7l9ck6" width="1" />

Take a look at history. Don't the police realise what happens to people who are crucified? Our course, our police are full of everything except brains.

Well mister commis, what ever do we do now, be very careful on your next move, this has gone viral.

Comrades we can question the Commish on his tactics, without coming all unglued. He has no easy job and hopefully once he's had time to reflection upon the outcry from the many thousands who seem to disagree with his position of having Comrade Rodney arrested, all will be well and the charges quietly dropped. But just in case the Commish stays tough, I am quietly returning all my overdue library books, before the policeman's comes to get me?

And, no, Comrade Justice of the Peace Rodney, the police ain't interested in killing you. So behave your words from here on. You always say you're a poor man, so all you have is your words, so treasure them, before they leaves your mouth?

Words can make or destroy a moment. Which shall it be?

I am not a fan of Rodney Moncur but I praise him for embarrassing the Royal Bahamas 'Mickey Mouse' Police Force.