Lourawls Making A Name For Himself 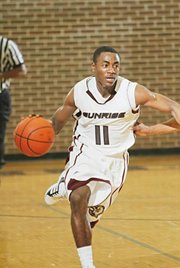 Sunrise Christian Academy has become a major pipeline for Bahamian basketball talent at the high school level, and now the latest product of the Bel Aire, Kansas institution has drawn interest from some of the top NCAA programmes in the country.

Headed into his senior season with the Buffaloes this fall, Lourawls Nairn has become a highly sought after point guard for the class of 2014.

“The recruiting process has been good so far and I am blessed to be recruited by high major schools, but there are no favourites for me at this point and time,” he said.

The 5’10” 170-pound Nairn has received offers from Kansas, Kansas State, Oklahoma, Ole Miss, Iowa and Arkansas. Schools that have expressed interest but have yet to make an offer include North Carolina, Kentucky, Michigan State, Miami, Indiana, Wake Forest, Alabama, and Memphis among others.

In the latest edition of the MaxPreps Freeman Rankings published last weekend, Sunrise Christian moved up 27 spots in the national rankings after claiming the KHSAA finals.

The Buffaloes finished first in their state class, rose to a ranking of fourth in the state and 134th nationally, which has helped increase Nairn’s exposure.

“I want to thank God for us having a great season. We finished 29-1, lost to the No.2 team in the country, but we were able to come back and beat them so it was a successful season for us,” he said. “We will lose a couple great seniors this year but we have high expectations for ourselves next year. God has been good to us.”

This season, Nairn was one of four Bahamians on the Sunrise Academy roster. The others are Andre Sands, a 6’8” senior formerly of Sunland Baptist Academy, and juniors Travis Mullings and Nathan Bain, formerly of the St George’s Jaguars and Tabernacle Baptist Falcons respectively.

The versatile Bain, at 6’ 6”, is a high flying wing player whose jumping skills netted a silver medal in the high jump at the 2011 CARIFTA Track and Field Championships.

“It does help having guys from the same country with you who want to do great things,” Nairn said, “Buddy and I have the same passion for the game, but we play two different positions so it would be tough to compare anything but our leadership abilities and the passion we have for the game.”

“My game has changed tremendously since I came from CR Walker. I struggled with my jumpshot just about my whole career, but I work on it everyday and it is the best it has ever been right now but I am still not satisfied with it,” he said. “Here at Sunrise we have the opportunity to improve everyday so that’s what I am doing. Our coaches bring out the best in us and we know how hard work feels. So my game has grown in leaps and bounds since then.”

Nairn’s success on the basketball hardwood is shared by a talented group of family members in their respective sporting disciplines. His younger brother Laquan Nairn recently was a double medallist at the 2013 BTC CARIFTA Track and Field Championships with a gold in the long jump and silver in the high jump. His uncle Demetrius Ferguson is currently a two-sport star in football and track and field with the St Francis Xavier University X-Men in Nova Scotia, Canada.

Prior to St FX, Ferguson came from a Holland College programme in which he led the Hurricanes to an AFL Championship and won the HiltonTrophy as the team’s MVP after finishing with 10 touchdowns, including seven on kick returns, two on interceptions and one rushing, despite playing with a cast on his wrist this season.

“There is no better feeling when you see your family members doing great,” Nairn said. “God gave us all different talents and I am happy for my little brother Laquan and my uncle Demetrius. They both work hard for what they want and I am very proud of them. It just helps me to stay humble when I see God’s blessings pouring down upon us,without him we are nothing. So I give him all the glory for the road we’re headed.”