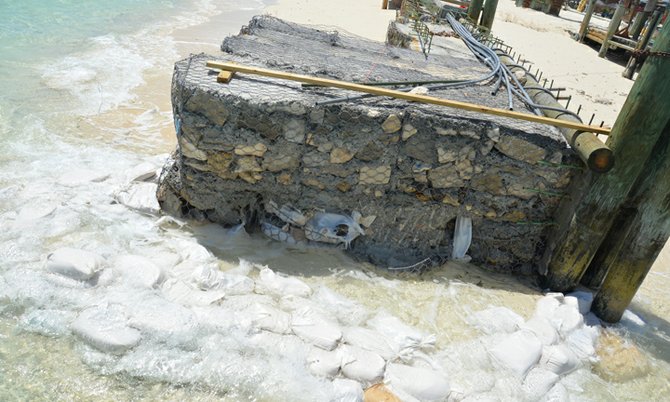 ATTORNEY Fred Smith has released photos of the ongoing construction at Simms Point/Nygard Cay which he says is damaging the environment.

Mr Smith, a leading member of the Coalition to Protect Clifton Bay, explained that the construction of breakwaters and beach works has led to sand collecting around the tip of the Simms Point, essentially expanding the beach around Lyford Cay billionaire Peter Nygard’s property at the expense of Jaws Beach and Clifton Bay.

Pointing to the Ministry of Environment’s 2009 request that Mr Nygard return the area to the way he found it, Mr Smith criticised the current government for failing to take action.

He said the construction has been carried out without permits and has damaged the land and marine environment in the area.

Mr Smith called on Mr Nygard to stop construction immediately, comply with the directives from the government, and remove structures which have been built without permits. He took the photos over the weekend and said he watched as a dredge pumped sand from the ocean floor onto the Crown Land.

“I watched as the backhoe tractor removed sand and spread it to other parts of the Crown Land beach which he has created. I watched as the dredge pump spewed, on a continuous basis, sand onto his land.

“I watched and photographed as workers stopped the dredge and hurriedly drove the tractor behind some buildings to hide it. I watched as the cement mixer continued to make cement while many men worked construction on the northern side of Nygard Cay.

“This is no joke. I have been told by the Buildings Control Department that no permits have been applied for or issued to Mr Nygard for the work which he has been conducting at Nygard Cay,” he said.

The Tribune’s attempts to confirm with Mr Nygard’s representatives whether or not such permits exist have been unsuccessful.

However, in 2010, David Davis, then Permanent Secretary in the Office of the Prime Minister, said that the structures in question were “unauthorised”.

In response, an unsigned letter attributed to Mr Nygard said the structures that were “constructed by us over the years were built exactly where they were placed with a clear understanding by all parties concerned”. Nevertheless, the letter said they would be removed and requested a meeting to confirm the details.

Last week, it was reported that Mr Nygard has applied for a lease for the excess land resulting from the construction – a moved opposed by the Coalition to Save Clifton, the group that originally campaigned for the preservation of the historic area.

Move over Comrade Rodney cause now we're talk'in about the publishing of photograph's in the media that can truly test the tolerance sensitivity of my Comrade natives?

No construction work should take place without obtaining permit from the government. However, if it is damaging the environment then prompt action has to be taken now. Whether you plan to build commercial office building or http://www.hammonsassociates.com/cust...">custom homes you need to obtain permit first before beginning construction work.