Pair Charged Over Shooting Of Policeman 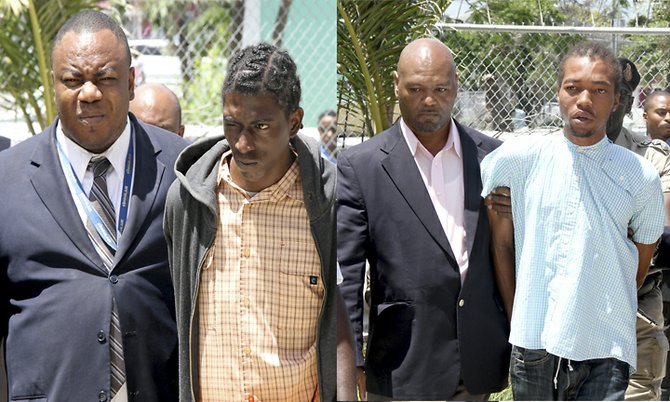 TWO men accused of the recent hold up and near-fatal shooting of a senior police officer were charged in Magistrate’s Court yesterday.

Maurice Armbrister and Excell Josey were taken to the Nassau Street Court complex under heavy police escort yesterday to be arraigned before returning Chief Magistrate Roger Gomez of Court no.1 concerning the late night attack on Supt Clayton Fernander outside his home.

Both Armbrister, 23, of Faith Gardens and Josey, 21, of Balls Alley, faced a charge of attempted armed robbery and attempted murder relating to the April 10 incident.

It is claimed that on the day in question, both men, concerned with others, attempted to cause the death of Supt Fernander. It is also claimed that they tried to rob him while armed with a handgun.

Supt Fernander was shot multiple times in the arm and upper body when two masked, armed men confronted him shortly after he pulled up at his residence in the St Vincent Road area. He was armed at the time, but was not able to return fire.

Chief Magistrate Gomez told the accused that they were not required to enter a plea to these charges as they were indictable offences.

The chief magistrate then arraigned Armbrister on additional charges, possession of an unlicensed firearm and ammunition possession.

Armbrister is alleged to have had a black-silver Smith and Wesson .45 pistol with 29 .45 bullets in his possession on the same day.

The accused was allowed to enter a plea to these charges, which he denied. He pleaded not guilty.

Police prosecutor Sgt Audrey Deveaux told the Magistrate that the Crown intended to have the matters combined as one and fast-tracked to the Supreme Court for trial through the presentation of a Voluntary Bill of Indictment.

That Bill will be served on June 5.

Attorney Roberto Reckley, following the arraignment and before the accused men were remanded to Her Majesty’ Prison, complained of police brutality on behalf of his client, Armbrister. Reckley also held the position of amicus curiae for the second accused.

Both defendants claimed that they were brutalised while in police custody and the attorney asked that they be seen by a physician.

The request was granted as the chief magistrate made the order before remanding them to prison, where they will remain until completion of trial or unless they are granted bail in the Supreme Court.

Can someone why do they sell ski mask in the Bahamas it does not snow and there fore it should not be sold all merchants Selling them should be fine or face jail and when the bags are inspected at the airport if bought in to the country you should pay a fine or be prosecuted the government needs to find ways to discourage crime these killers don't even care about there life's so yours don't mean nothing...