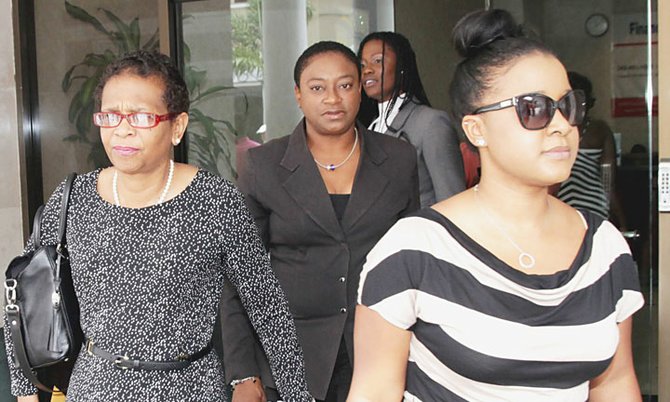 Students and parents of the St John’s College 2013 graduating class exit the court after yesterday’s decision.

TWENTY-six students of the 2013 graduating class of St John’s College had their hopes dashed yesterday when Chief Justice Sir Michael Barnett ruled that while contracts did exist between those students and the Anglican Central Education Authority, the ACEA had the discretion to cancel their graduation ceremony and prom.

For the remaining students of the 114 graduating class who did not participate in ‘Ditch Day’ or other activities that broke the contract, the Chief Justice offered hope that the ACEA would reimburse them.

He added no amount of money could compensate the students for losing out on that ‘special day’ that rewarded them for years of hard work.

The ACEA cancelled the school’s 2013 class prom and graduation four days before the planned ceremony because of students’ ‘gross insubordination and deceit’.

Among the reasons for its decision were that more than 90 per cent of seniors did not show up to school on ‘Ditch Day’ and some students took part in a video posted on Youtube which showed them dancing.

On July 23, the two parties appeared before the Chief Justice in a civil action over the controversial cancellation.

The plaintiffs were seeking more than $2,000 for each student, for damage, emotional distress and vexation resulting from the cancellation.

Yesterday Sir Michael said the situation between the parties was unfortunate but ruled that, in the circumstances, the ACEA’s action did not constitute a contractual breach.

Following the ruling on the civil action, Diane Stuart, Vice Chancellor for the Anglican Diocese, and Krystal Rolle, who represented the ACEA, spoke about the outcome.

“I think basically it’s an unfortunate set of circumstances but I believe it was the right decision that was made this morning,” Stuart said.

When asked if ACEA, in light of the Chief Justice’s ruling, would reimburse the students who did not participate in the breach of the school’s rule, she said: “He said it was ‘a hope’ and again the point is, there was no legal obligation to do so.

“But the diocese will look at the ruling, consider it, and they will decide whether or not they will make any decisions as a result.”

She added: “We have not gotten into any discussion as to people’s feelings. Because it was before the court, we were allowing the court to decide and then we will discuss the matter.”

Stuart said that the Anglican Diocese nor ACEA do not expect the ruling to have an impact on student enrolment at St John’s College.

She said: “I hope not. I hope not. I just believe that it’s been a learning experience for everybody and I think we need to learn from it and to move on. I’m just glad it’s over and we can all just move on.”

Ms Galanos, who represented the 2013 St John’s graduates, argued that the ACEA was in breach of a contract with students when it cancelled final activities.

However, Ms Rolle, who maintained there was no contract between the two parties, pointed to rules in the school’s handbook which state 12th grade students are entitled receive a diploma, not a ceremony.

Ms Galanos had said it was dangerous to punish an entire class after each student signed an individual contract. She said the school continued to receive payments for the graduation and prom, even after students were accused of misconduct.

She claimed students should have been awarded damages for being denied pleasure and enjoyment, a legitimate expectation of any graduating student.

According to the Chief Justice, the document clearly stated that the school board can exclude any student from the final activities without evidence, and also noted that it was the school’s discretion to make the decision.

However, Sir Michael Barnett ruled that while contracts existed between those students and the Anglican Central Education Authority, the ACEA had the discretion to cancel the graduation ceremony and prom, and therefore was not in breach of contract.

He said: “Having said that, I cannot leave this judgment without expressing my sympathy for those plaintiffs and their parents who have not participated in any of the misconduct complained by the defendant.

“No amount of money can really compensate them for the disappointment they undoubtedly endured by not culminating their high school career with the traditional graduation exercises.

“It is my hope however that the defendant could find the way to reimburse those for whom no direct evidence of wrongdoing exist, the $300 paid by them which has been lost by the decision to exclude all students from participating in a graduation ceremony.”

Ms Galanos issued a statement yesterday afternoon saying: “On behalf of my clients, I would like to thank the Chief Justice for expressing his sympathy for the students and their parents who have not participated in any misconduct complained of by the Anglican Central Education Authority.

“We thank him for acknowledging that no amount of money can really compensate them for the disappointment they have endured by not culminating their high school career with the traditional graduation exercises.”

The Chief Justice was also thanked for ‘his expression of hope’ that the ACEA could find the way to reimburse those for whom no direct evidence of wrongdoing existed.