‘Visitors leave money on ship for fear of robbery’ 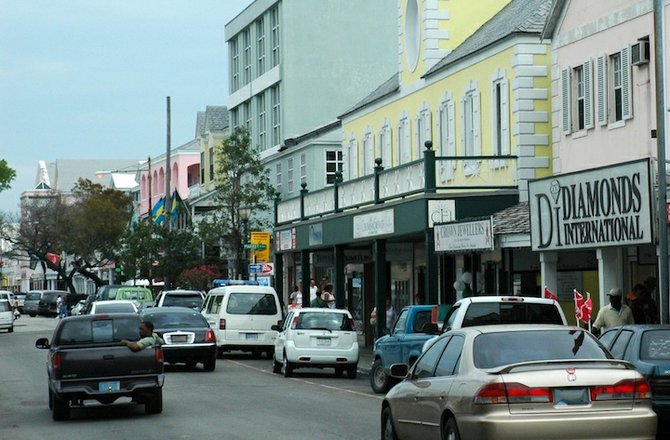 DOWNTOWN businesses have suffered a financial loss as visitors often leave spending money and valuables aboard ship for fear of being robbed, according to Tourism Minister Obie Wilchcombe yesterday.

That safety precaution, Mr Wilchcombe said, has been taken by many cruise ship passengers who have been forewarned by officials of the escalating crime situation in New Providence.

He noted that criminals have created a realisation that the Bahamas could be labelled as an unsafe destination as there have been several incidents of crimes committed against visitors.

Most recently was the alleged rape of a 15-year-old tourist last week. Meanwhile at least three US Embassy officials have been victims of robbery over the past few months.

“In some case,” he said, “we have received reports where visitors came on shore, but didn’t bring any of their materials of wealth, any funds or any jewellery and that was because they were afraid.

Mr Wilchcombe told parliamentarians during debate on the Bill to amend the Evidence Act that Bahamians must get involved in cracking down on crime, especially against tourists.

He warned that the Bahamas could follow the same fate as destinations, including Mexico to which the US advised its citizens to avoid travel some time ago.

“We have been monitoring all of the posts abroad  to ensure that the Bahamas is not being tagged as a country where it is not safe to visit. I again remind Bahamians that the Americans in particular took a strong position against Mexico and the levels of crime that reached a particular point and because it involved so many Americans. They got to a point where they were advising Americans against travel.”

In April, Mr Wilchcombe told The Tribune that cruise ship officials had warned passengers against travelling to downtown Nassau, but instead to only attend Señor Frogs. The concerns were raised to the government at a weekly meeting with several executives.

At the time, he said, the authorities had committed to saturation patrols downtown in an effort to protect visitors.

Yes it is an unsafe destination to visit or investment.

I suggest that a Billboard be erected alerting Bahamians to the crime problem so that they can help correct it...

I was just thinking the same thing...2yrs ago billboards were everywhere telling all and sundry how unsafe the city was...why is he surprised?

you are absolutely correct. The signs were prominently placed so that our visitors could see them. What did they expect to happen. Karma is a bitch

And this is a surprise because? After all the minister's party did their best last year to inform the tourists of the crime situation in our country.

Hang tight Comrade Edison, don't you be jump'in over no PLP sinking ship. When we win back the government, I promise you be the first I name be a senior minister. You got's any feelings on my bringing Bran back into our big tent? Edison with PR enemies like the PM's own minister of the tourism, Her Majesty go'in be calling ya fellow Abaconiann back into her Royal Service, to lead her red shirts Official Opposition Party ... real soon. Tell PM Christie to keep my $150,000 BENZ nice and clean. You know the one that I had factory ordered, just before getting fired. Edison you got's trust Pappa takes good care you. After all, we is both from Abaco, although they say you was born in Long Island?

I'm sad to say that I couldn't recommend Nassau as a vacation destination to friends from abroad looking for a relaxing vacation. Unless you are trapped at a bland and pricey all-inclusive, you must deal with horrible traffic, untangling which roads are one-way (sometimes without signage), and spending every waking moment in fear of being robbed. I recommend the out-islands instead.

What, is Minister Wilchcombe actually admitting that his government's solution to the crime problem, Urban Renewal 2.0, is not working? Well, glory be!!! Why are we still spending precious dollars on a failed programme?

Because they are not man enough to admit when they are wrong. They have yet to admit and apologize to the Bahamian people for those devastating signs the erected during the election and until they admit wrong doing people are reluctant to support their efforts

Personally I wonder what the tourists thought about the Condom Bill boards! I'll bet most visitors are staying aboard with their cash and valuables too.

Sadly, we are not willing to do what must be done to reverse the deterioration. We have marginalized what has become a majority of the population. The lawless, the clueless, the desperate, the broke. Between the Ruling elite, and the wealthy supporters both foreign and domestic, the real problem is not even recognized yet. No cure is possible until the ailment is admitted to, and expertise sought.

It is a miracle anyone is dumb enough to visit the Bahamas these days. The spiraling violent crime has victimized residents and tourists alike. People are robbed and beaten in broad daylight. Home invasions occur nightly and include murders, sexual assaults and violent attacks. Shots are fired down Bay street with unsuspecting tourists caught in the crossfire.

Say goodbye to the Bahamas as you once knew it

Oh, wonderful. That should be great for the economy.

It safe ,better,cheaper to stay on the ship unless you just want to drink.