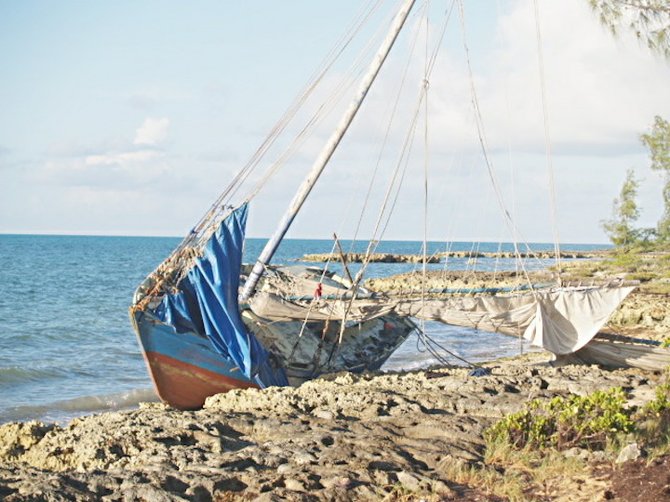 In the latest incident, according to Defence Force officials, HMBS Yellow Elder arrested a Haitian sloop off Green Cay about 60 miles south of New Providence around noon on Tuesday.

There was no official count on how many immigrants were arrested, but The Tribune understands a Defence Force boat with almost 100 Haitians arrived in Nassau late last night.

The undocumented immigrants were taken to the Detention Centre to be processed.

This arrest took place several hours after Defence Force Marines caught 16 Haitian migrants in Nassau, They had made it ashore shortly before 5am yesterday.

The 13 men and thee women were found hiding in bushes in South Beach after their 45-foot sailing sloop ran aground in waters off southern New Providence.

Defence Force Marines, Police Officers and Immigration Officers spent most of the day combing the immediate area for other illegals, but their search was fruitless.

It is estimated that almost 50 migrants evaded capture.

Defence Force officials say they will continue their search throughout the night.

Last month, another Haitian sloop ran around west of a South Beach ramp.

Officers arrested 10 men and one woman in the area of the vessel, however, according to Defence Force officials, the number of people onboard the vessel could have been anywhere from 20 to 100.

According to the latest statistics, more than 900 illegal immigrants have been arrested by the Royal Bahamas Defence Force this year – almost as many as the 12 months of 2012.

Of that figure 850 of the immigrants were Haitian.

This is simply because no matter where they are found in the Bahamas (for example Ragged Island) - they are given FREE transportation to our capital city where they stay in detention center long enough for the public to forget about them (a month or so) - then they are given a shack, a car/truck, a food card from social services, and a business license, along with resident papers and a passport

Really, i'm surprised that a thousand don't come every week.

If the sloops are arriving like this, what are the chances that there are other sloops washing ashore on the other islands that have not been caught? It seems like they are all working together, from the construction of sloops to days that they will be sent out hoping to land in the Bahamas/America.