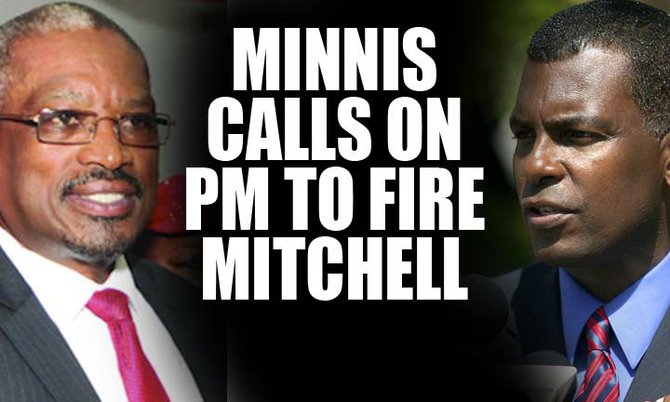 Speaking at a press conference at FNM Headquarters, FNM Leader Mr Minnis called on the PM to ‘dismiss Fred Mitchell from his Cabinet forthwith,’ adding: “It has now become clear that Minister Mitchell has exhausted every ounce of credibility as Minister of Foreign Affairs. The FNM is appalled at the dismal mismanagement of our country’s foreign interests by Minister Mitchell.”

He called on the government to release the ‘full and unedited’ reports of all investigations that have been conducted to date into Cuban detainees at the Carmichael Road Detention Centre.

He said: “To date, the Minister of Foreign Affairs has not given a full account of what took place at the detention centre on May 20, 2013.

“The FNM has been advised that several senior government officials and ministers became aware fairly early that a major instance of abuse had taken place.”

Mr Minnis said the FNM had found out that in the early hours of May 20, there was an attempted escape from the detention centre by seven Cuban detainees.

This escape was prevented, he said. As punishment for the attempted escape, at least five detainees were physically abused to a severe degree. The abuse was so significant that three of the detainees had to be taken to PMH for treatment. One person was detained and two others returned to the detention centre.

Following the beatings, the remaining detainees performed and videotaped a reenactment of the earlier beatings.

Minnis said: “Our information is that the reenactment was facilitated with the assistance of one or more Defence Force officers who provided the fatigues for the actors in the performance.

“The FNM has been further advised that several senior government officials and Ministers became aware fairly early that a major instance of abuse had in fact taken place. There was at least one major meeting of senior law enforcement officers and cabinet ministers who were briefed as to what had transpired. As a result of that briefing, a more intensive investigation was ordered.

“Minister Mitchell continued to use strong, combative and undiplomatic language intended to deflect attention from the underlying legitimacy of the issue raised by demonstrators. He had multiple opportunities to tell the Bahamian people and the international community the full truth of what had transpired.”

Mr Mitchell said tonight: "With regard to their allegations about the video tape, how many times must you tell these people that an investigation is still on going into this matter and when the matter is done the government will follow the results of the investigation.

"That is no cover up. That is clear, pellucid, easily understandable and verifiable. Only the FNM cannot understand.

"It is simply unimaginable that we have today something which is so simple and direct be twisted into some vast political conspiracy. I will say it slowly this time: the government has indicated that there is an investigation into the allegations made at the detention centre. This will mean a review by a retired Justice of the Court of Appeal and a leading cleric. Those are my instructions. That has been my consistent public statement. The statements have been in the public domain for weeks. Until the time of the completion of the investigation, the FNM can spin what spurious lines it wishes, the facts are stubborn on this matter. When the investigations are complete, the government will act and the chips will fall where they may."

Comrades it makes for some strange politics when Leader Minnis wants the PM to fire Freddy but he ain't got the bullocks to fire he own Marsh Harbor MP Edison?

^^^ your so pathetic... Key getting fired for not walk away in HOA with Minnis is EQUIVALENT TO Fred Mitchel bad public relation skills as Minister of foreign affairs?

STOP PLACING YOUR HEAD IN PERRY CHRISTIE BEHIND FOR ONCE AND THINKKKKKKKKKKKK!!!!!!!!!!!!

Apparently, there is the belief that the role of the opposition is to oppose. The role of the opposition is to keep check on the ruling party as they govern to ensure that they be faithful to their commitment, that they act in the best interest of the country. The Foreign Minister ignored the obvious political posturing of some minor public officials from a country who seem to have a habit of contradictory speech and behaviour. This is disgraceful, inflammatory, opportunistic rhetoric. I thought better of the Leader of the Opposition.

Ya see why this new FNM aint making no sense. Why would Mr.Minnis, as an opposition leader, ask the current leader to 'fire' his appointed Foreign Affairs Minister? Who else is even eligible and/or more credible than Fred Mitchell to take on this position in the PLP? It would be even worst if you asked me. He knows that the PM is not going to do this, and they are all laughing at the FNM for making such trivial requests. I think Mr. Minnis tries every avenue to oppose the PLP without thinking about the consequences of his remarks that could ruin his own credibility and ultimately the credibility of the FNM. Many may assume that he is trying to get retaliation from his former suspension, and the FNM's lousy attempt to boycott the HOA. I am an FNM unfortunately but this is a Government, lets leave all the tit for tats at home and get down to the real business. Now, I really dont see how this PLP is going to generate 10,000 jobs by the end of their 1st year in office. Of course this was one of the main reasons they got in but who is holding them to their word? Not the FNM, they rather spend days in the HOA talking about the Prince Nygard's stem cell proposal, and oh yea the poor handling of this Immigration dilemma. Sending these politics to the House is almost like sending children to preschool to, who may guess, ..PLAY! Yet we face the 'same ole' problems every 5 years with little to no progress, and oh yess, less land because between the foreigners who are basking in our sunlight and these out of hand shanty towns, we Bahamians ga soon be fighting for our own repatriation and/or asylum.

As sad as it sounds, that is the way the game is played in democracy. The good side of democracy is the leader is voted in by the people and the bad side is the opposition will almost always oppose the ruling government, even if it means sacrificing everyone else. The way this game is played and especially lately, anyone in opposition is going to oppose anything good and allow things to go down hill just to get a crack at winning the next election.

Minnis is a Traitor!!!!!!!!!!!!!!!! DAMN TRAITOR!!!!!! You dont play polotics with stuff like this. The Tribune and guardian are global. Now that JACK A$$ is giving aide to the us republican senators. IDIOT!!!!

people got cell phones and herb in fox hill ,,,i,ve been there ,how do you think we got them ,,,,,,,,,,pay guards to bring them ,,or some guards bring it and set up a inmate to sell them ,phone ,phone cards ,cigs ,herb etc

what ,,no RBDF officers are corrupt ,,,,,,remember the Loriqum

Minnis iz the biggest jackass in the history of the Bahamas! Stupid ass man! SMT Na when the US embassy stop givin bahamians visa ya ga wonder wat happen. I mean it done going on na, more than half of us cant travel to the US for no reason, not even on police record. This government is a bunch of shit, both sides!

This is the one time we should stick together and defend our country. Why Hubert Minnis? Why would you now stir up confusion with allegations when you have provided no proof for the tribune to print. All you have given us is "information from your sources". ??????? The government has denied the inhumane treatment of the Cuban Detainees and that video to the WORLD. . Its sad, i agree, Hubert Minnis is just another opportunistic politician. How does this now benefit the reputation of the Bahamas Hubert Minnis? I shouldn't ask anyway because he doesn't care.

The video was a fake. It presented as though it were not a fake. Now our opposition says it's a re-enactment?

Someone better throw out some evidence.

Minnis made a mistake, never go on someone's word, get the facts and the proof.

This is a bad move on the opposition.

NOT WITH STANDING THE VIDEO ,,there is an investigation ,,none of us know if there was abuse or not ,,PGC and his inner circle know and perhaps the U/S embassy ,,,,,,,,,,,,as a former "bad boy " that had numerous run ins w/ our law enforcement beatings are the morm ..THE last time i was arrested before i changed ,they rode me in the van all night while they jumped out and beat the living sh##t out of young males and told them to get there ass back over the hill ,,until youv,e seen the war on the streets btw ,1 am and morning and been incarcerated its hard to imagine the brutality in the streets ,fox hill and perhaps the detention center ,,geez even our teenagers have poor conflict resolution skills what do you think about RBDF officers dealing w/ difficult immigrants ,,

As an FNM supporter I totally disagree with the information that the now leader is putting out there. I don't think this should or could be used for political milege this is a national issue and should of been dealt with and kept in house. I don't know who is advising our dear leader at this time but that was not good advice and that person need to be fired.

Minis 'may" have some evidence and wants Friddie to deny there was a beating ,,if some of us Bahamian may have got the sh##t beat out of us at the Krome ave detention center in the U/S ,Would you want the U/S to keep it in house ??

But that is just the thing concerncitizen, the US would've kept it in house because they would wait for it to just blow over. Remember about a decade ago the US was putting illegals in jail with the hardcore criminals and just leaving them there forever basically. 60 minutes had to do a special on it and the guy that was featured on 60 minutes happens to be a Bahamian that was lock away for running on 10 years or so and probably wasn't going to get out for the rest of his life, the day after the show he was release from prison. So the US have there own black eye with illegals.

yes they do but as you say it was exposed ,,,,,,,,,,,,,remember too that the congress women chairs the committee on foreign affairs,sometimes it better to say "something happened and we as a caring christian nation will make sure it never happens again " then to attack the country that provides 80% of our income ..

The right thing to do is admit no wrong, and say something along this line; Our investigation didn't uncover any abuse, however, we still see a need to enforce regulations to prevent any incident that can possibly happen. We will be adding CCTV to the center and provide extra training to our guards about human rights.

I have discovered your post to be extremely animating and loaded with great data. http://bestloansforpoorcredit.com/">loans for bad credit

Extremely enlightening post! There is a ton of data here that can help any business begin with a fruitful long range interpersonal communication crusade! http://bestloansforpoorcredit.com/">loans for people with bad credit

Such an extremely valuable article. Extremely intriguing to peruse this article. http://chaturbatetokenshack.com/">related article

Much obliged for posting this enlightening post. I like the substance in light of the fact that its straightforward Thanks! http://chaturbatetokenshack.com/">visit the site here