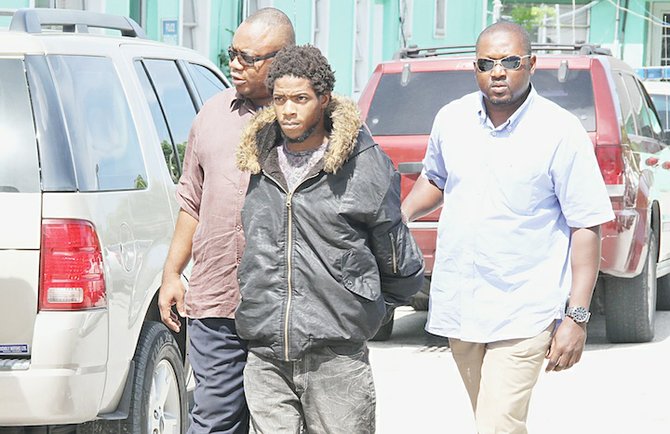 A MAN accused of murdering a two-year-old infant was not required to enter a plea to the murder charge he faced when arraigned in Magistrate’s Court yesterday.

Trevor Carey, 22, of Sumner Street, was handcuffed and shackled as he was brought before Acting Chief Magistrate Joyanne Ferguson-Pratt of court no 9 concerning the beating death of Teon Morley.

Carey is alleged to have murdered the toddler on August 16.

Morley was found unresponsive in his Allen Drive home around 3pm with injuries on his body.

Carey, who was not legally represented in yesterday’s proceedings, was told that his case would be fast-tracked to the Supreme Court for trial through service of a Voluntary Bill of Indictment.

The presentation is scheduled for November 18, his next court appearance.

He was remanded to Her Majesty’s Prison until completion of his trial.

Policeman mistakenly leaves his dog in a hot car leading to his death, and were inundated with comments.

The value of a Bahamian childs life verses that of a dog is astounding!

Saves the dogs, cats, dolphins, sharks, turtles, birds, conch, Haitians and Cubans and everything else except save the Bahamian.......Blatantly shameful!!

My Lord....this is awful. This is the point I was making a few short months ago. Nobody wants to fight for the rights of the child... have a march against crime against children...stiffer penalties for pedophiles... Everybody marching against gambling instead...all kinds of placards on the street....every street corner...but where are these same keepers of the cityyyy! This fella knows he's wrong but something is telling me that he was probably even abused as a child and survived...how else could he think hitting a kid with a frying pan is normal... that's what he is used to.

That... doesn't make any sense at allhttp://xfini.com/profile/ponygirl">. Like, it is not a woman's responsibility to have as many babies as she possibly can and it's not a man's responsibility to father as many babies as he possibly can. My stance is that if you do, with your own voluntary actions, create something that will be a personhttp://www.kittygames.de/profile/pony...">, then you are responsible for it. One of the main focal points of my argument is that you should be held accountable for the risks you take, especially when ignoring your responsibilities comes at a cost that is perceptively high. My argument is not that you should spend your life creating these really valuable things that are people, but that you don't have the right to throw away this valuable thing after you've created it because you are responsible for it.

Really an incredible work is here. This is the article to whom I was scanning for quite a while and now I discovered it here, http://cougardatingwebsites.net/">cougar dating websites

I will dependably be yours. I shocked with the examination you made to make this specific distribute unfathomable.http://chaturbatetokenshack.com/">cheat tool

I like it all that much. Intriguing post and a debt of gratitude is in order for imparting. http://topnocreditcheckloans.com">bad credit personal loans

Much thanks to you for giving such a keen post, I truly appreciated it.You have incredible knowledge about the subject of your post.http://verticalboost.net">visit my website