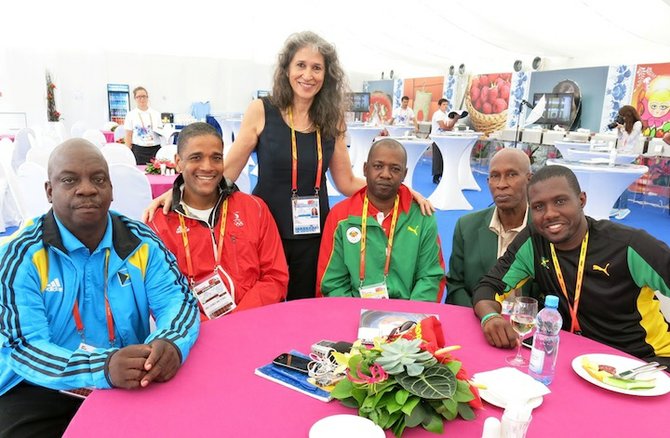 Representatives of the Sport Journalists Chapter of the ACM met with Victor Lopez, president of North America, Central America & Caribbean Athletic Associations (NACAC) and Anna Legnani, deputy director in the IAAF Communications Department, during a luncheon with the NACAC Family at the IAAF Lounge on August 15.

In attendance were Michael Bascombe from Grenada, Kwame Laurence from Trinidad & Tobago, Brent Stubbs from the Bahamas and Andre Lowe from Jamaica.

Both the IAAF and NACAC agreed to work closely with the Chapter in the areas of training and other technical assistance.

Lopez spoke about the hard work ahead and the need to work closely with the media in this regard. Invitational, area permit and other track and field meets in the region, including the CARIFTA Games, were also discussed. And, for the first time, NACAC will have sponsors.

The president spoke about the advanced stage of negotiations with several sponsors, including ESPN, Mondo, Scotiabank, Gatorade and others.

In the case of ESPN, the deal is for the twinning of coverage for the NACAC Senior Championships (starting in 2015) and the CARIFTA Games.

Lopez also reported plans to appoint a press committee, among other working committees, within NACAC. He promised to update the media on these plans once they are finalised.

The IAAF continues to be supportive of the media and through Legnani and her team, the international federation will be holding a series of training workshops throughout the region.

“We believe that this initiative to form a grouping of Caribbean Sport Journalists is timely and this augurs well for the development of the profession,” Legnani said.

All parties agreed to keep the lines of communication open and to follow up on areas discussed.

The committee members also attempted to meet with the president of the International Sports Press Association (AIPS), Gianni Merlo, who was also in Moscow, but that didn’t materialise.