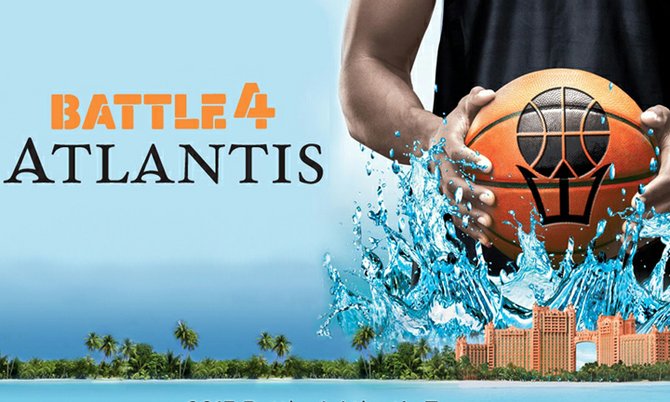 PARADISE ISLAND, Bahamas (AP) — A second straight night, against a ranked opponent, and all accompanied by plenty of dramatics.

Villanova seems to be relishing these moments.

Tournament MVP James Bell scored 20 points and sparked a huge Villanova rally, Josh Hart added 16 off the bench and the Wildcats beat No. 23 Iowa 88-83 in overtime to claim the Battle 4 Atlantis championship on Saturday night.

"We've got a lot of heart," Villanova coach Jay Wright said. "We've got good depth. Our young guys are growing up. Still only November, though. We've got a long way to go."

Maybe, maybe not. Within a span of about 24 hours, Villanova took down No. 2 Kansas and an unbeaten Hawkeye team.

"We've got some depth," Wright said.

Some talent, too. Plenty of both, actually.

JayVaughn Pinkston scored 14 points and Ryan Arcidiacono added 13 for the Wildcats (7-0), who got two big offensive rebounds in the final seconds of overtime. Kris Jenkins scored five of his 10 points in overtime for Villanova, which was down by 15 in the first half, then held Iowa (7-1) to one field goal for nearly a 10-minute stretch of the second half.

Devyn Marble led all scorers with 24 points for Iowa. Zach McCabe scored 14 and Mike Gesell added 10 for the Hawkeyes, who scored the first three points of overtime but never led again.

"It was two really good teams going at each other," Iowa coach Fran McCaffery said. "Both teams have experience. Both teams have some young guys who are playing well. That's why you come here. We're thrilled for the opportunity to be here in this environment and my hope is ... we can learn from some of the mistakes we made tonight."

Dylan Ennis' 3-pointer gave Villanova a 78-75 lead, the Wildcats stayed on top the rest of the way, and a few players were throwing confetti in the air when the game finally ended.

"We just have great chemistry," said Arcidiacono, whose team outrebounded Iowa 48-36. "No one's in it for themselves, anything like that. We're all in it for the team, we all love each other and we all battle for each other."

Down by 12 with 11 minutes left in regulation, Bell turned the game around with a trio of 3-pointers in a span of 72 seconds. It started a 21-2 burst over a 9-minute stretch by the Wildcats and when Pinkston made a pair of free throws with 4:32 left the lead was 64-57.

"We had to stay with what we do," Bell said. "We played Villanova basketball to the end ... and we believed it was good enough."

Ultimately, it was. Still, Iowa didn't make it easy.

The dramatics just kept coming from there.

"We've got to give them credit," Marble said. "They came out in the second half, made the adjustments and made the winning plays."

Arcidiacono — the hero of the semifinal win over Kansas — connected on a big-time 3 with 1:15 left in regulation and a one-point Wildcats lead. On the next possession, Marble drove the left side of the lane, scored, got fouled, and the free throw put Iowa up 71-69 with 55 seconds left.

Next? Of course. Arcidiacono, again, from the same spot, putting Villanova up 72-71. Marble tied it with a free throw with 30.1 seconds remaining, and after Villanova's hope of a gamewinner at the end of regulation bounced off the rim, to overtime they went.

For McCaffery, the loss had to particularly sting.

He's a Philadelphia native, played college ball at Penn, got a graduate degree from Lehigh. He had coached against Villanova twice before, losing in 2004 when he was at UNC Greensboro, then falling in the second round of the 2008 NCAA tournament when he was with Siena, his most recent stop before getting the job at Iowa.

His third time against Villanova wasn't the charm, either — even though his club had a double-digit lead in the second half.

A 19-3 first-half run gave Iowa a 31-17 lead with 7:29 left. But Villanova clamped down defensively to close the half, holding the Hawkeyes scoreless in the final 3:15 and getting within 42-33 at the break.

That's when Bell went on his personal 9-0 run, and the battle really started.