‘Strange Object’ In Sky Identified As Rocket Launched From Florida 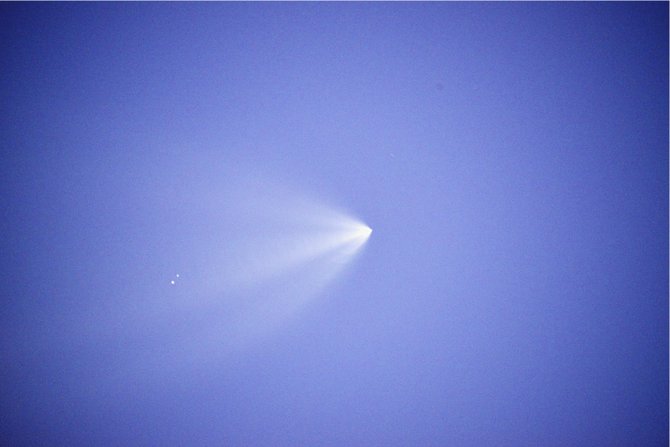 A NEW communications satellite was launched into space aboard a private rocket last night - and its launch was captured by photographers in The Bahamas.

His image shows booster rockets dropping off shortly after the rocket launched at 5.41pm last night.

Meanwhile an image was posted onto the Facebook site of FNM Deputy Leader Loretta Butler-Turner of the rocket as it passed over the Jib Room in Abaco.

It was posted by Linda Kenny Leffler in Abaco.

“Reports that there was ‘a strange object’ in the sky over Long Island seems to have been seen over Nassau too. Maybe other islands witnessed this as well? Persons are wondering what it was,” Mrs Butler-Turner posted.

The images are of the SpaceX Falcon 9 rocket which lifted off from Cape Canaveral Air Force Station on Tuesday, carrying a 7,000-pound satellite.

It will be placed in geostationary orbit. That means it will orbit at a fixed point above Earth, in sync with the Earth’s rotation.

The launch was originally scheduled for early this year, but has been delayed by technical issues with the rocket.

The last try was on Thanksgiving Day when two attempts were aborted.

The SES-8 satellite will be used in conjunction with another communications systems to increase bandwidth capacity in Asia and provide expansion of services such as maritime communications and distance learning programmes.

Is the satellite (not the launch event, the satellite) the really bright light that's been in the western sky for the past few nights?

You could not ask for a clearer night to see the launch and watch the rockets separate. The event should have been promoted more. The bright light in the western sky is another satellite that was launched a few years ago. Part of its activity is to replace the Op Bat balloon that tracked drug craft. So now the Feds can sit in their offices anywhere in the world and zoom in on drug boats and planes. They can also send out drones to get a closer look or to do what they have to do Everyone know what drones are capable of and famous for.