Minister: Govt Not At Fault Over Cruise Ships' Inability To Dock 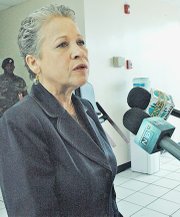 TRANSPORT and Aviation Minister Glenys Hanna-Martin yesterday insisted that the government was not at fault for the inability of three large cruise ships to dock in Nassau harbour last Monday.

The incident, which prevented the landing of 10,000 visitors from the Allure of the Seas, Carnival Conquest and Disney Dream cost downtown businesses nearly $700,000 in revenue.

Mrs Hanna-Martin explained to parliamentarians that the ships were battling adverse weather conditions on that day, which she said saw 35 to 40 knot winds. She later admitted that two tug boats responsible for berthing cruise ships had been problematic for some time and needed serious work after years of neglect. However, the Minister did not make clear whether the tug boats were undergoing maintenance when the incident occurred.

Placing further blame on the previous Ingraham administration, Mrs Hanna-Martin said both tugboats, the Snapper and Amber Jack, had not been maintained for years.  The tug boats had been inoperable for six months and 12 months respectively, she claimed.

She said: “It was agreed between these stakeholders – the cruise ship captains and the pilots – among all parties that for the safety of the vessels and our port no attempt would be made to enter the harbour.

“Since taking office 19 months ago the Snapper was placed on dry dock for fundamental works, the first time in a long time. And the Amber Jack has completed parts replacement and servicing.”

Mrs Hanna Martin also criticised The Tribune for what she referred to as citing a “phantom source” for its information about the harbour incident. However, this newspaper was informed of the critical situation by a high level government source.

For nearly 20 minutes, Mrs Hanna Martin defended the government’s position in the matter. But when The Tribune attempted to ask the Minister several questions pertaining to the tugs on Tuesday she refused to entertain the questions. Instead she left the Cabinet office completely ignoring reporters who had asked for a comment.

Last week, this newspaper also asked Port Controller Commander Patrick McNeil to shed light on the situation, he shrugged off the request. Instead, he said he was in charge of the Port and not the downtown business owners who wanted explanations after losing hundreds of thousands of dollars.

He later released a statement saying that the three cruise ships were scheduled to dock at the Port of Nassau on Monday, November 25 at 6am, 7am, and 8am. However, Commander McNeil said the captains of the Allure and the Conquest decided to cancel in advance their visits to Prince George Wharf because of a weather system that had entered the northwest Bahamas late Sunday evening.

Cmdr McNeil also said that the Disney Dream did enter Nassau Harbour at 8am, assisted by the tug ‘Snapper’ and two private tug boats. However, as the vessel was attempting to dock, it was unable to complete the manoeuvre because of strong wind gusts of about 38 knots. The Captain of that vessel decided to leave the Port of Nassau.

"Placing further blame on the previous Ingraham administration, Mrs Hanna-Martin said" Ok, notice to anyone interested in running in the next election, this is an as-is country. You buy it as-is ("buy it"..., may be unfortunate wording but anyway..). Yes you are allowed to assess the current condition but after a year it's time to stop blaming the previous owner and get to the work of fixing the car and accepting responsibility for improving the current state. That's just the way it is.

"Mrs Hanna Martin also criticised The Tribune for what she referred to as citing a “phantom source” " Dangerous ground. Media organizations are extremely important institutions in any democratic society. Stop threatening the Tribune. Media organizations worldwide quote unnamed sources, the Tribune or any media firm does have a responsibility to verify that what they report has solid foundation in fact, but they are under no obligation to name a source unless that source wants to be named or the court compels them to name them.

Perhaps someone should attempt to contact the cruise ship companies to get their reasons for not docking.

I believe they did, but the cruise ships chose not to comment....have to check the original story to make sure...

the government and successive governments need to stop placing blame on each other.

your in office now so instead of acting like children fix the problem because you are hurting everyone by playing this dumb blame game.

I'm no expert but a while back working near where the ferry boats lets of passengers Down Town, I witness the danger that the operator encounter in the safety of the passengers and their vessels being damage because of rough seas. So to imagine the size of a cruise ship being at the mercy of rough seas to be smashing against the port would not have been a good decision. Besides the tug boats not being in good working order, mother nature should have the finger pointed towards her and not the previous government.

Well if we haven't used those tug boats (not operable) for 8 to 12 months - maybe we don't really need them. Cruise boats have been coming all that time.

Take them out in the ocean and sink them.

How come there is never enough money to fix things when the PLP is in power? How come it is always someone else's fault? How come nothing works? How come there are grand pronouncements and no actions to back up the words?

Because that is just the way the PLP ( People's Lazy Party) rolls.