Loretta: I Don’T Want To Be Leader Of The Fnm 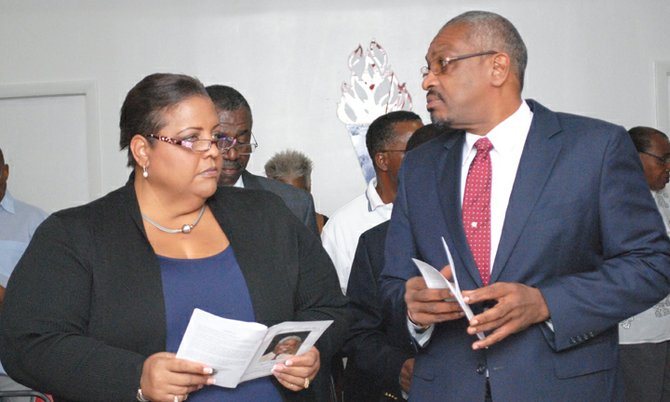 FNM Deputy leader Loretta Butler-Turner yesterday said she has not set her sights on becoming leader of the party.

In fact, Mrs Butler-Turner declared her unwavering support for FNM leader Dr Hubert Minnis whom she described as a part of the party’s new generation of leaders.

The Long Island Member of Parliament was a guest on a local radio talk show where she responded to questions over the party’s leadership and a possible return of former FNM leader and Prime Minister Hubert Ingraham.

“But when we talk about Dr Hubert Minnis, I think the sad thing is too many people make comparatives between him and obviously his very good friend Mr Ingraham. Their styles are totally different.

“I think the fact that he is now the leader, people need to pay attention to what he has to say and his mode of operation and allow him to grow into that role. To the best of my knowledge we all should be rallying ourselves behind the leadership of Dr Minnis.”

When asked if she would contest the leadership position at the request of supporters during the party’s next convention, she replied that it was not her focus.

“Right now I am just trying to be the best Deputy leader that I can be. We have a democratic organisation and if the convention of the Free National Movement wants to have a change in leadership they know that isn’t done until there is a convention,” Mrs Butler-Turner said.

It's no longer a serious question, if Minnis will be forced from the leadership but by whom? Point out where in the story Loretta has stated that she has NO interest in the red shirts leadership? More accurately might be she lacks the psychological resilience required to unseat an opposition leader. I hope with Comrade President Nelson's passing it will remind my fellow Bahamalanders that the colour of one's skin is is only an issue, if we as a people allow it to become one. Are you listening Comrade Brent?

Hillary Clinton "did not want to be president of the United States", but she sure put up a good cat fight for the role. Almost caused Barak Obama to lose the election. Now they say she is resting to do battle in 2016. But it is good that Lorreta Butler choose to show maturity and not slap (yes pun intended, couldn't resist)Hubert Minnis with a fight for the leadership role. It kind of works well where Mrs. Butler-Turner covers for Mr. Minnis' weaknesses while he is growing into the position of leader. He needs a few more ettiquite classes and some more prompting on effective speaking and the PLP may be history come 2017. When was the last time you saw Perry Christie and Phillip "Brave" Davis sharing the same podium?

. . “A leader. . .is like a shepherd. He stays behind the flock, letting the most nimble go out ahead, whereupon the others follow, not realizing that all along they are being directed from behind.” —Long Walk to Freedom: The Autobiography of Nelson Mandela

“It is better to lead from behind and to put others in front, especially when you celebrate victory when nice things occur. You take the front line when there is danger. Then people will appreciate your leadership.”

No one with sense will ever trust Loretta "better educated"

Man. Seriously. The only folks talking about HAI coming back are PLP's. Why are they so hell bent on him coming back? Wassup wit dat? Obsess much? Yinna PLP's really need help, ya'll got Ingraham on the brain. More than any FNM... ROTLMAO!!!!

But I will say this. If she does contest the leadership role I'd vote for her in heart beat! I think she'd make an excellent PM.....

I think that LBT is a good opposition member and a loyal foot soldier. However the next leader of the country should be someone strong on policy and strategic thinking and I don't think that LBT has the necessary knowledge. While that is not necessarily a requirement if one has good advisors, one must have the humility and capacity to sublimate the ego to accept and incorporate that advice. I do not feel that it is the case with LBT, but Minnis shows that quality by accepting the leadership of LBT. I like Minnis because he knows how to make money, he has the guts and courage of the businessman and he is not only educated but enlightened. Unfortunately, with the plethora of small minds in this archipelago, that doesn't translate to acceptance or votes.

The way things are going Mickey Mouse will be able to lead the FNM at the next election and they will still scoop up the votes. The PLP are making such a mess of governing that a single term is assured. Those voters who were seduced by their empty election promises must be feeling cheated and angry. To those voters I say : cast aside the blind party loyalty next time around and vote for the government that is going to be accountable to YOU. This country needs a government that will represent the best interest of all its citizens, not just those wearing a yellow shirt or a red shirt. The PLP's record of discrimination and concealment has been quite frightening this term. Left unchecked we would be heading for a Zimbabwe type scenario where only the party faithful get to eat.