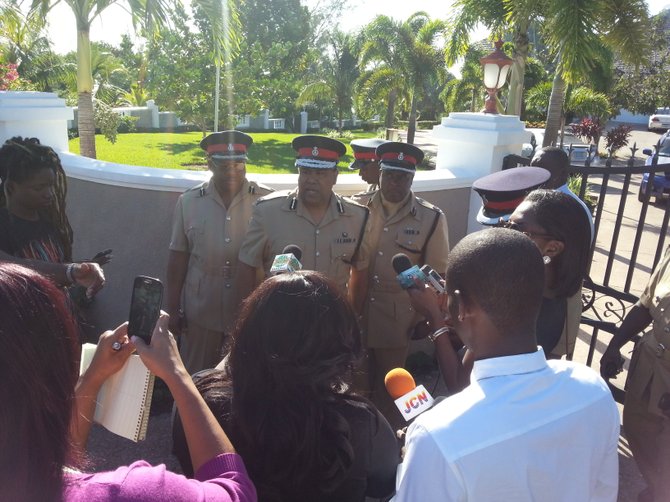 Many readers posed various questions, but most demanded that the Christie administration take the crime situation more seriously, especially since it has reached an elected official serving in the highest government office.

One reader, bismark, said: “Now the DPM will see how countless Bahamians feel, when they are robbed, raped and murdered and they let the suckers go free.

“Let this be a lesson to all of these politicians who have their heads in the sand that anyone can be a victim of crime.

“He might not be so lucky next time around. These young men are wreaking havoc on society, but you the lawmakers sit on your ass with all sorts of fancy speeches, nothing is being done to punish these criminals.”

Another reader, B_I_D, said: “Criminals may not be the brightest individuals, but they have to be idiots to target someone who has body guards and security details, unless you are deliberately trying to send a message to that individual that they are not untouchable.”

Greentea said: “This is a really serious act and it requires a response that is sure and swift. Unfortunately for us, I have no faith – and this is a sad thing to admit much less say – that this administration or the last has/had the vision or political will to develop and enforce solutions to the problem.”

Honestman agreed and made several suggestions, including: eliminate all the “non-jobs” in the public service, cut out all excessive government expenditure including foreign trips and consultants, pour a large part of the savings from these measures into the war on crime, toughen the acceptance standards for new police recruits and set up an elite task force, containing both uniformed and undercover officers, to tackle the armed criminals.

Bahamianpride said: “I’m still shocked at this story, this takes bls and a certain commitment to recklessness. This is disturbing on three different fronts: the degree of lawlessness going on in the country, the careless and bold nature of the criminals, and the lax nature of security surrounding DPM Davis, which indicates that regardless of his prior statements, he does not take the crime problem seriously.”

Cecil Newry, a blogger, added: “Clearly no one is safe in this country. The armed robbers knew exactly whom they were robbing and they did not care. The entire country should be in fear as it seems as if we are unable to protect our leaders, one needs to question whether our investors, tourists and average citizens are safe.”

Causal - when a person has no job, no income, they have to eat, drink, pay rent, the electricity bill, mortgage and whatever else. When that person sees his/her family hungry - they will sometimes do anything to ease the burden on their love ones. We look to politicians to help; especially when they tell us they can help at election times. Politicians are better off than most of us. But once elected their promises goes out the window. They no longer seek to help the 99% - they go the other way and cling to the moneyed elites. They leave us to bushwhack one another for survival. The attack on the DPM could happen to any one of us and has happened to many of us already! We cannot really take a bite out of crime - until we change the causal predicament: economics, the economy, jobs, income! The whole society is at risk until we solve the cause - only then will there be a different effect.

Yep. Been saying for years that the flight into gated communities ignoring the state of the inner city would come back to haunt us. Little Monte Carlo my after burner.

This statement sums up the situation...let's hope that something will be done in Parliament soon!

what's new about politicians lying to people? it's been the cycle since the inception of the ideal of democracy.Oh but wait, lets vote in another party cause that will surely fix all of our problems!!!! Don't forget the free T-shirts and beer!!!!!

IN MY LIFE I HAVE NEVER HEARD OF SEEN THIS FOOLISHNESS WHAT IS GOING ON IN MY COUNTRY.THIS GOVERNMENT SHALL HANG THEIR HEADS IN SHAME. ALL THAT DAM MOUTH THE MINISTER OF NATIONAL SECURITY HAD IN MR TURNQUEST FACE CAME BACK TO HUNT HIM.