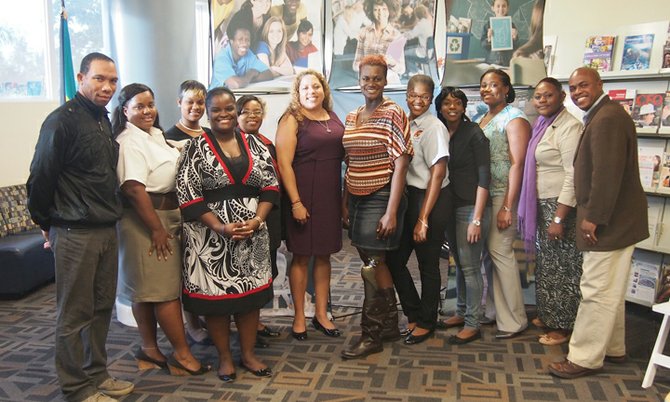 WOMEN ARE not the only victims of domestic violence. Men in the Bahamas and around the world are abused and battered in intimate relationships. These cases are even more under reported.

In an effort to reaffirm its commitment to ending violence against women and bring focused attention to the issue, the US Embassy’s International Narcotics and Law Enforcement Affairs Section invited Detective Tucker to meet with law enforcement officers, government representatives and local NGO’s in Nassau and Freeport to address challenges.

Detective Tucker is assigned to the Special Victims Unit/Criminal Investigations Division and comes face to face with cases of domestic violence daily. Her case load primarily includes incidents against women. There are a few cases in which women are the perpetrators, she said.

Domestic violence — also known as domestic abuse, battering or intimate partner violence — occurs between people in an intimate relationship. Domestic violence against men can take many forms, including emotional, sexual and physical abuse and threats of abuse.

Detective Tucker said one of the reasons domestic violence against men goes under reported is because some men are embarrassed to come forward about the abuse.

“We do not see it a lot because unfortunately men do not report it. It is very under reported with men because in today’s society they are viewed as weak by their peers or their family. Their families may say ‘what do you mean she is beating you up?’ That happens. I have a couple of cases that do involve men but there are very few that come forward,” said Detective Tucker, while in the Bahamas last week.

In several of the cases involving men as victims, Detective Tucker found the abuse occurred regularly with women being the aggressors, often hitting, slapping, punching, and using violent objects to gain power or control of the situation. This has in some instances provoked a physical reaction from the man.

“I recently had a case where a man was provoked by his girlfriend. She had slapped and pushed him and he ended up putting her in a choke hold. It left a bruise on her neck. When he came in (at the police station) I said to him ‘Why didn’t you walk away when she was giving you a hard time, while you were on the phone with your baby’s momma?’

With a situation like that, unfortunately society is going to side with the female because that is what historically happens. In that case men should just walk out and get out of the situation,” Detective Tucker told Tribune Woman.

“In another case the couple were fighting over a cell phone. The girlfriend told her boyfriend ‘Who are you texting, who are you talking to?’ and they got into a fight and she ended up stabbing him in the rear and he left the house. It was actually the neighbour who called 911, and he was not even going to report it.”

“When he went to the hospital he realised it would cost money, so he was going to go to a friend that works in the doctor’s office. What ended up happening is that the police came out and they spoke to the female and they only got her side of the story. The guy ended up coming back to the station and told his side of the story. When we put it together we found out that she was the aggressor and she was the one who went to jail. She confessed to it. But we would have never known about that if the neighbour did not call 911. He heard the whole thing and he saw him running out and saw blood on his back,” she said.

“In South Florida, we have a huge gay and lesbian population. We are starting to work towards that so that we can streamline this kind of domestic violence. It is not only woman and man, it is men and men, and women and women.

“This is happening. It is happening in the homes and it is just that people are not reporting it because they are ashamed and they are embarrassed not only because of the incident but the fact that, if they report it, they have to report their lifestyle. For a gay man to say ‘You know I am being abused by my boyfriend?’ and at the same time say ‘Oh I am gay’ that is another hurdle you face with law enforcement. Police officers are not the sensitive, touchy, feely type. Some are but some are not. So it is kind of hard for some to come up to a man in a uniform and tell them that,” she told Tribune Woman.

Detective Tucker said it is important that the word about domestic violence and services that are available reaches members of the lesbian and gay community.

“We have educate people and let them know that the times are changing, society is changing, and we have to change with it,” she said.

Lets address the GREATER of two evils, Who abuse women the most in The Bahamas because of their(the abuser) lack of, or short comings? MEN! by a huge margin, Who abuse MEN the most in The Bahamas because of their (the abuser/interrogation "officer") lack of or short comings? Women?? Nope! It's THE POLICE! So this is where I have a problem when it comes to the death penalty in The Bahamas, I DO believe in "If you Intentionally take someone's life without their consent, you loose YOUR life without your consent" In other words, to the "criminals" if you live a life of crime, make sure you have a signed will! However, when we have Police, CID, DEU etc instead of UPHOLDING the law even when it come to "Due process" decide to break the law and violate suspects rights by beating the crap out of them to the point that, whether the suspect is innocent or guilty, just to remain alive while chained or handcuffed in their custody, they will sometimes "confess" EVEN WHEN THEY ARE INNOCENT! need to be dealt with swiftly! Solution: Train interrogation officers to effectively do their jobs, and punish those who don't, NO MAN IS ABOVE THE LAW! Who do they think they are? a Politician/"Lawmaker"/Criminal Lawyer/Gangster in a Tie? Create a system where victims of police abuse can sue the RBPF for pain and suffering etc hit them where it hurts on every level, demotion, no pay, imprisonment etc THE LAW HAS TO BE RESPECTED BY ALL! Then lets start the hanging! sounds barbaric? Have ever you ever seen a open gunshot wound on an innocent victim? an innocent bystander? innocent baby/teenager? Have you ever faced the nozzle of a gun? trust me YOU DON'T! Listen,you think praying is going to stop these trained killers, think again! Which religion in the world pray more than the Muslims? look at what the USA did to them, or look at what they're doing to themselves! LETS GET REAL, If they have no regard for human life that they can see, what you think about "someone" who they CAN'T see! Even some Religious Gangsters show no regard! "The chickens have come home to roost!" after years and years of sexual abuse, Incest, thieving, lying, backstabbing, hypocritical culture openly displayed by the Political/Religious Gangsters in The Bahamas, we are now reaping the residuals of our past deeds and actions. Just like in the earlier centuries where GUNS AND GERMS EQUALS POWER!! Welcome to 21st Century Imperialism/Colonialism! Dam*it did I go of course again? SMT, I'll be at the shooing range with my AR-15