Man Found Guilty Of Murdering Mother Of His Child 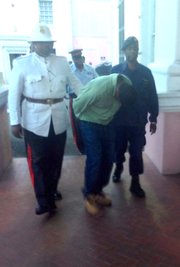 Rashid Dean outside of court.

GUILTY was a Supreme Court jury’s verdict yesterday in the trial of a man accused of murdering the mother of his child at their workplace.

The announcement by the foreman that Rashid Dean was unanimously guilty of the August 14, 2011, stabbing death of Onieka Johnson was met by silence by relatives of the accused and sobbing from some relatives of the victim.

While Dean had nothing to say when asked by Justice Indra Charles’ clerk why sentence should not be passed on him at that time, his lawyer, Murrio Ducille, requested that a social inquiry report be done on Dean.

Before adjourning and discharging the jury, the judge asked prosecutors Darnell Dorsett and Abigail Farrington to submit a sentencing bundle to the court before January 30.

“God is good”, “Lord Jesus”, “Oneika can now rest in peace” were some of the many comments heard outside the Supreme Court complex on Bank Lane as relatives embraced each other and thanked God for the verdict.

Meanwhile, Mr Ducille spoke with The Tribune about the outcome, the way forward, and his client’s state throughout the proceedings.

“We have quite a number of grounds of appeal already, ready to be filed,” he said.

“We think they are very solid grounds. There are a lot of things that transpired in the trial, we think were irregular, so we’ll have to take it elsewhere.”

When asked about his client, who held his head down when being escorted by police to the courtroom to learn of the jury’s verdict, Mr Ducille said: “He has remained calm.”

“In all of this he has been extremely phlegmatic so he’s strongly resolved that he was not part of the perpetration of all this. So we’ll have to wait, ya know?”

On the day in question, Ms Johnson was found unresponsive in a security booth of the Club Med Resort at San Salvador having suffered multiple lacerations.

Dean, the father of her young child, was arrested days later.

The jury heard evidence from Dr Caryn Sands, a pathologist at the Princess Margaret Hospital, who testified that of the 15 cuts and stabs wounds on the body of 21-year-old Oneika Johnson, two stab wounds on the right side of her neck and two that punctured her left lung were the most fatal, because of the significant bleeding caused.

Dr Sands noted that these wounds were likely to have been caused by a knife. She said the cuts found on Johnson’s forearm and fingers were consistent of a person defending himself from such an attack.

Evidence was also given by video link by Marisa Roe, a forensic analyst and forensic manager of Fairfax Identity Laboratories in Richmond, Virginia.

The Crown’s last witness explained the findings of her analysis on items submitted by the Royal Bahamas Police Force for DNA profiling.

Oneika Johnson was profiled not only on six of the nine scene swabs, but also on the three knife swabs and a tyre sample.

No other profiles were found on those 10 samples.

When asked by prosecutor Darnell Dorsett if it were possible for a victim’s blood to mask an attacker’s touch DNA on an instrument, the analyst said this was possible if there was much more blood compared to the other person’s DNA.

During cross-examination, Mr Ducille asked the analyst if she was able to say whether the swab samples for the knife came from the blade or the handle. Ms Roe said she could not.

Mr Ducille asked if it were possible for DNA to be moved from one place to another. The analyst said that was possible.