Bimini Resort 'Is In Peril' 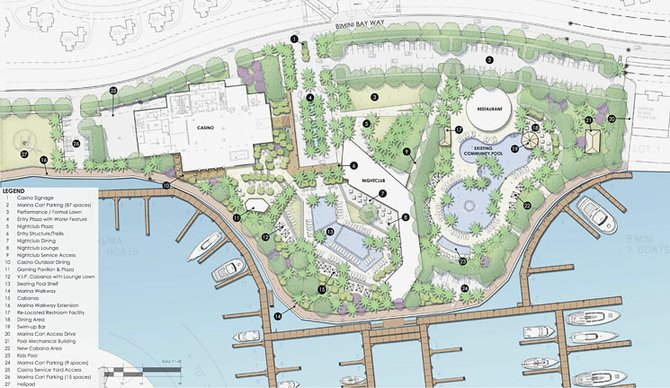 THE company seeking to build a controversial cruise ship terminal on Bimini has revealed that its “entire operation is in peril” as a result of the US government banning a key aspect of its business model due to alleged immigration violations.

Court documents exclusively obtained by this newspaper reveal how Genting’s Miami cruise ship service, and its investment in the Bimini Bay Resort and expansion, billed as creating 500 new Bahamian jobs, have been jeopardised by US Customs and Border Patrol’s (CBP) decision to ban the vessel’s night-time sailings.

The filings in the US District Court for Columbia, Washington DC, where Resorts World Bimini and its affiliates have launched a Judicial Review-style action challenging CBP’s decision, make clear their Bimini development model cannot survive without the revenues produced by their cruise ship’s night-time excursions.

While the Bimini SuperFast’s daytime sailing to and from Bimini are unaffected, the documents reveal that Resorts World has also been using the vessel for night-time excursions into international waters.

Passengers sail out from Miami for gambling and partying on the high seas until dawn, thereby generating a revenue stream that Resorts World admits is vital to sustaining its entire $275 million investment in both Bimini and south Florida.

The court documents make clear Resorts World’s business model could collapse as a result of the night-time sailing shutdown, which CBP has imposed under the US Immigration and Naturalisation (INA) Act.

Well this could make some people very happy!!

They're making excuses for a failed business plan, but, GOOD RIDDANCE!

I agree...excuses because they aren't making projected revenues. Their get out of jail free card

I hope Perry Christie is reading this article VERY carefully and does not allow this fly by night company to screw up one of the most beautiful islands in the Bahamas.

The lies and excuses that will be dished out with this will be very interesting. Cant wait to see what Mr. Oblivious aka Mr. Christie will say if he says anything.

It's hard to fully comprehend how poorly thought out this whole Resorts World Bimini project has been.

They have been dragging their massive anchor over Bimini's seabed for months. They've wanted to do significantly more damage by dredging through Bimini's reefs for their pier project. They've created an unequaled amount of negative publicity for the island. And now, just like EVERYONE around here knew would happen, they're already talking about pulling out from the island, albeit for some "BS" excuse.

Everyone involved with this disaster should be held accountable, from the developers to the Government officials who signed off on this horrible idea.

Passengers sail out from Miami for gambling and partying on the high seas until dawn, thereby generating a revenue stream that Resorts World admits is vital to sustaining its entire $275 million investment in both Bimini and south Florida.

Chinaman thinks he is smart. I bet on the 'high seas' they would pay no bahamian vat or casino taxes, toss a few bread crumbs to the employed in bimini, destroy their seabeds.

The gringos know more about capitalism. chinaman only fooled the bahamian government.

Confucius Say: Is OK to let fool kiss you; but do not let kiss fool you.

Wise one, you speak truth

Too bad...maybe being in international waters for all of 15 minutes isn't working out for them.

I think this may be a good thing as Bimini itself is in peril due to the resort itself. Our government does not get it as they have no idea as to what it is that makes the Bahamas so special. Can Perry swim?

When is someone gonna come in and rebuild The Complete Angler. That was the demise after Bimini Bay came into the picture. They are an anchor dragging the island down...

Business model has a few holes in it at the expense of Biminites, and its long time visitors.