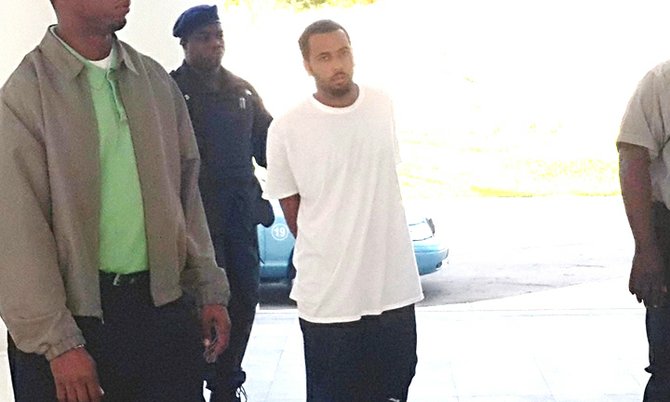 A 22-year-old man was arraigned in Magistrate’s Court yesterday accused of abusing a year-old boy.

It is alleged that Fox intentionally harmed the infant on Monday, December 16.

According to police, the child, suffering from bodily injuries, was taken to the Marsh Harbour Clinic by his mother.

“I did not mean to hurt the child,” Fox told the magistrate as he pleaded not guilty to the charge.

Magistrate Williams denied Fox bail “for his his own security.”

He was remanded to Her Majesty’s Prison in Fox Hill, until his trial begins on February 27, 2014.

Fox was not represented by counsel.

How can you " not mean to hurt" a 1 year old, yet leave bruises?? You gave yourself the best CHRISTmas present that you deserve.

I am told by someone in Abaco that this boy/man has been a terror to his family and the community even before he was a teenager. He has fathered a number of children among the illegal residents of the Mud and Pigeon Pea community. He is from a mixed race and his mother's family have tried to assist the illegitimate children, unfortunately their resources are very limited. It is believed that his father maybe deceased. All of the residents of Marsh Harbour and surrounding communities are outraged that a man would do something like this to anyone much less a one year old child. I think the judge must have heard that the family of the child was looking for him and sending him to Fox Hill Prison saved somebody from getting into greater trouble. Also the baby's father is is Fox Hill and the jailer should be sure to keep them separated.

Heck no...put the father and the boyfriend in the same cell...could solve a couple problems right there.

So what, if daddy in jail,let's know how much a man and father he is...

The sad thing about this is, this boy was maybe fortunate enough that the abuse left marks. Abuse in this country is rampant and sometimes conducted by well meaning people who don't know better. How many of us have heard stories about mummy taking off her shoe to beat the child because she was so mad...glad this guy was caught but this society has many abuse victims, the scars are just invisible.

So what is the relevance of stating that hes of mixed race? Yes his mom is white and dad is black and deceased... so the hell what!!!!! Other than that, everything else stated makes sense.

He is mixed race? How does that matter? Mixed race persons are more likely to be socially deviant??

A quick word to baby mamas who fall in love with men " who ain't ya baby daddy." Do not trust your chirren with men who are not the baby daddy and who are not blood relative until who find out who 'dey is." Not cause a man love you and he sleepin side you an doin freshness mean he gone love ya chirren too. Dem set who gat dey hair 'dred up', like twine and fishin line, is call dey sef lion. You kno wat a lion nature is? When he wann a female lion he is kill off any other lion who foolin wit her until he get her. Then he is kill off any young offspring she have with any of them other other lion. Talkin bout destroyin da competition, and making he sef king of da jungle(ss). When a male lion wann sex he will kill his own offspring jus to mate with the mother. nuff said still!

Ok... another stupid comment, John are you retarded? I understand the first part but now basically men with dredlocks kill their children (or any competition)? This young man dont even have locks. Your reasoning makes no sense. And just so you know, the 2 'lions' ive dated in my life love their children to death as well as the children of their significant others. I know men that people think are well off upstanding citizens that treat their stepkids like crap, as well as dads thats people think are pillars of the community that abuse their wife and children. Think before you make these ignorant comments.