Honoured For Bringing 40 Years Of Joy As Santa 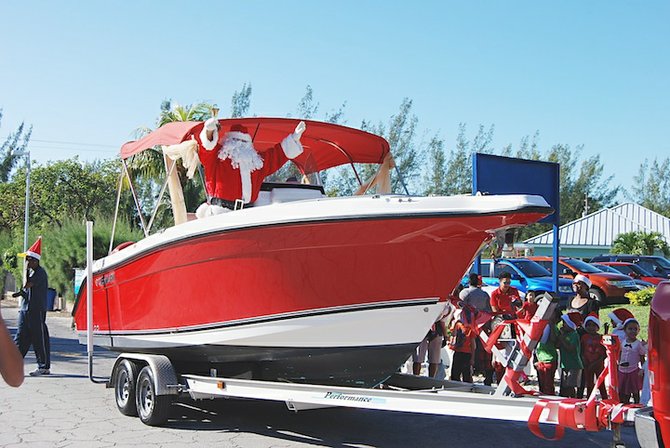 AFTER 40 years of playing Santa Claus, Robin Brownrigg was honoured for bringing joy into the lives of children this Christmas.

The staff and students of St Andrew’s School, where Mr Brownrigg makes an elaborate appearance every Yuletide, came out to greet Santa and celebrate the season with him and his family.

In all the years past, this year being no exception, the importance of the annual visit was so that Santa Claus could convey the message of Christmas to the children and accept a present from them to pass to children who would otherwise not get a gift.

“This is the truest form of the magic and joy of the holiday season and it has given me more joy over the years than I could possibly recreate any other way,” Mr Brownrigg said.

“Having a five-year-old come to me and say that the gift they are giving will make any sad child very happy is magical. It is especially meaningful for me this year and I was deeply humbled that the school gave me such a wonderful gift of their love, spirit and energy. My family and I will cherish this day for ever.”

In addition to making appearances at St Andrew’s School every Christmas, Mr Brownrigg – who in his day job is a broker and appraiser with Bahamas Realty – has also played Santa at Rotary events, for the children at the Ranfurly Homes for Children and others.

“Everybody just wants me because I bring a lot of energy. I change things up and I put my heart into it,” he told The Big T.

Mr Brownrigg said sailing icon and Olympic champion Sir Durward Knowles once hailed him as the best Santa Claus ever.

The most fun part of playing Santa, according to Mr Brownrigg, are his entrances: “I’ve made entrances on a red Volkswagen one year, on a red Ford 69 Mustang the next. I remember one time I came in on one of those three wheelers and Mrs Claus was on the back as well. Driving in traffic, I’d never seen so many cars almost have accidents”

There was another year where he rode in on a sleigh pulled by donkeys, but he admitted the animals were quite stubborn and difficult to get through the gates of St Andrew’s School.

“I’ve come in on a helicopter, that was five years ago,” he said, recalling the excitement on the faces of children as he landed.

Twice he has come on a fire truck, and once on a Harley-Davidson motorcycle. This year, with the help of Mark Roberts, owner of Builders Mall, he rode in on a decked out red boat with a red engine.

Asked if he would ever hang up his Santa boots and beard to retire, he said: “That was my threat.”

However, St Andrew’s School coming out in full force this year to honour him may have changed his mind.

“They hoped that I would reconsider for next year,” he said.

Mr Brownrigg said he would keep going no matter the cost, as long as his partner, Mr Roberts, continues to come up with the creative ideas for those unique entrances.

Asked what made St Andrew’s special, Mr Brownrigg said it was the fact that the school encourages its younger students to bring at least one gift to a needy child in their community.

“That’s why I get involved in their programme,” he said.

Mr Brownrigg said the greatest reward for him over the last four decades has been the joy he has been able to bring through his appearance, because for him, children are the focus of Christmas.

Despite the discomfort, at times, from having to wear the costume in the heat for a few hours, Mr Brownrigg said: “What brings joy to my heart is knowing I can touch little souls.”

This year at St Andrew’s, he was honoured in song and given a ‘carol diploma’ that is currently being framed in gratitude for his service.

Seeing the school auditorium filled with children and then hearing the announcement by the headmaster that they were honouring him, Mr Brownrigg said: “I had no recourse but to appreciate and treasure that thought and moment.”

Comrade Santa Browning we need more like you. But the next time your crack team of Reindeers are unavailable, try not repeating you're having your sleigh pulled by them damn House MP's. You of all people should know that neither "Slapp'in" Loretta or ""Shotgun" Pot Cake Leslie are no substitute for Comrade "Old Faithful" Rudolph The Red-Nosed Reindeer. OK, I know both them MP's too try act like they're all magical. But Rudolph is a real "Red Nose."

Fred Mitchell volunteered to play the role of Prancer.

Perhaps he needs to go to the less fortunate,ST Andrews?there are many unfortunate kids around,you so happen to choose the more privileged kids,who really don't need for nothing.

I think you are misunderstanding what he is doing...he is going to St. Andrew's where he is COLLECTING a present from each child that the parents send in, that then in turn get redistributed to the needy.

"In all the years past, this year being no exception, the importance of the annual visit was so that Santa Claus could convey the message of Christmas to the children and accept a present from them to pass to children who would otherwise not get a gift."

You are a good man Charlie Brown...errr, I mean Robin Brownrigg. Always been a stand up individual. Good on ya mate, Job well done.